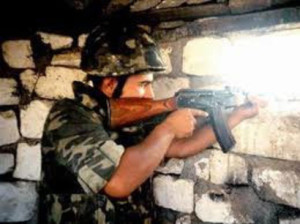 At the same time the Azerbaijani Armed Forces were fired on from positions located in the villages of Horadiz, Ashagi Abdurrahmanli in the Fizuli region, Yusifjanli and Sarijali in the Aghdam region, Goyarkh, Chilaburt in the Terter region, Kuropatkino in the Khojavend region and at the nameless heights.

The shooting was countered by return fire.

The conflict between the two South Caucasus countries began in 1988 when Armenia made territorial claims against Azerbaijan. Armenian armed forces have occupied 20 per cent of Azerbaijan since 1992, including the Nagorno-Karabakh region and seven surrounding districts.

Azerbaijan and Armenia signed a ceasefire agreement in 1994. The co-chairs of the OSCE Minsk Group, Russia, France and the U.S. are currently holding peace negotiations.

Armenia has not yet implemented the U.N. Security Council’s four resolutions on the
liberation of the Nagorno-Karabakh and the surrounding regions.