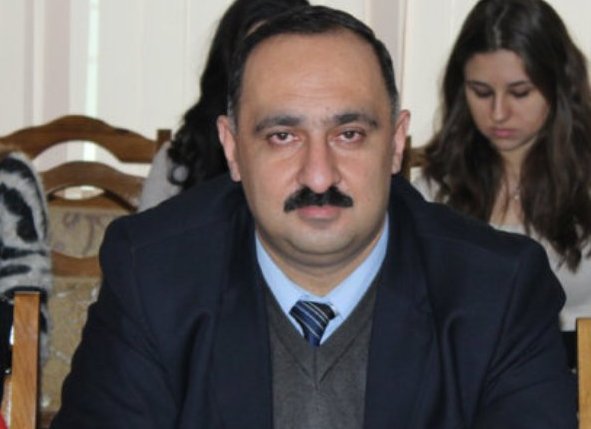 Our interlocutor is Ilgar Niftaliyev, PhD in History, from the Institute of History of the Azerbaijan National Academy of Sciences.

– Mr. Niftaliyev, there are a lot of speculation on Armenian myths. What do you think is the biggest Armenian myth?

– The biggest Armenian myth claims the existence of the so-called “Great Armenia”. The state supposedly covered a territory from the Mediterranean Sea to the Caspian Sea. A book by Yagub Mahmudov, Director of the Institute of History, will be published soon: “Real History”. The book also touches upon the myth on “Great Armenia”, which allegedly included the South Caucasus, Caucasian Albania and Atropatene. Based on authoritative sources, including the famous Russian historians researching the ancient period, the book proves that Argishti I or Parthian rulers were not Armenian kings. The political figures the Armenian historians claim were the leaders of the Seleucid state. They leader became rulers of the smaller states founded after the collapse of the Seleucid state. Parthia was one of those states. The representatives of the Parthian dynasty were of Persian origin, not Armenian. They were not the rulers of the so-called “Great Armenia” as claimed by Armenians. This is a very interesting fact.

The book also discusses the emergence of the pseudo-concept on “Great Armenia” and its misuse. Mr. Mahmudov presents many interesting facts by referring to Strabo and other Greek and Roman authors. He explains that there were geographic definitions – Great Armenia and Lesser Armenia. But Great Armenia was not the name of a state. There is analogue of Greater Media and Lesser Media. The first one was governed by the Macedonians, the second was known as Atropatene. The concept appeared for comparison, but the Armenians try to turn it into a state name by claiming Great Armenia covered a large territory.

Other myths are related to claiming Karabakh and Nakhichevan as ancient Armenian lands, six Albanian principalities of Karabakh as Armenian principalities as if they were a continuation of an Armenian state in Karabakh. The most forged issue is related to mass relocation of Armenians to Karabakh, Nakhchivan, Erivan following the Treaty of Turkmenchay. The Armenian historians argue the migrants were repatriates, who had been exiled to Iran by Shah Abbas. Nevertheless, migrants cannot be called repatriates 200 years later because of change of 8-9 generations. This is another myth. The post-Turkmenchay relocation of the Armenians to our territories is presented as a return.

– Why do the Armenians claim Karabakh, Zangezur, and Nakhchivan more?

– Territorial claims, such as claims to Nagorno-Karabakh, appeared in 1918 After the establishment of the independent countries in the South Caucasus. When determining the borderlines, each country proposed its principles. Our principles were based on archeo-ethnographic, the Armenian on ethnographic principles. Their idea was based on the fact that all the territories where Armenians live should belong to them. In fact, a number of Armenians lived in Nakhchivan, Zangezur, Karabakh, including Ganja. The number of Armenians in Nagorno-Karabakh and Zangezur was equal to the number of Azerbaijanis. They made up one third of the population in Nakhchivan. The Armenians were the majority in four of the seven districts of Erivan province while the remaining three – Ordubad, Sharur-Daralayaz, Nakhchivan were dominated by the Azerbaijanis. However, those territories were also claimed as ancient Armenians lands.

– On the Internet we can too frequently read articles on the Armenian territorial claims to Nakhchivan. However, as they admit, these claims are prevented by the Treaty of Kars. Various Armenian statespeople enjoyed huge influence both in Russia and the USSR. What factors forced the Soviet Armenia to sign the Treaty of Kars?

– The Treaty of Kars is based on the Treaty of Moscow concluded on March 16, 1921 by Turkey and Russia. In accordance with Paragraph 3 of the treaty, Nakhchivan was granted autonomy; this provision was subsequently affirmed by Paragraph 5 of the Treaty of Kars. In fact, the existence of the same regime in Armenia, Azerbaijan and Russia at the time of the Sovietization forced the Armenians to refrain from their claims. They felt that all three countries were part of the same state. The Bolshevik ideology demanded bloody conflicts be ended. Moreover, they could not withstand the pressure from Moscow. Both the Armenian and the Azerbaijani sides had to accept the autonomy of Nakhchivan. Granting the autonomy was related to annexation of part of Zangezur by Armenia. In such circumstances, granting the autonomy was the only way to maintain Nakhchivan within Azerbaijan. The most interesting part is that the Turkish troops were stationed in Nakhchivan when the issue was discussed in Moscow. They could have easily incorporated the territory into Turkey, having not accepted the status of autonomy for Nakhchivan. The Turkish side did accept in order to obtain a border with Azerbaijan. The Treaty of Kars is an international document with no expiration date. The Armenian side claims that the treaty was terminated on March 19, 1945 when Stalin unilaterally broke the relations with Turkey. But it is not the case. The treaty is permanent and valid. In 2011, Turkey and Russia marked the 90th anniversary of the Treaty of Moscow. It means that both Russia and Turkey recognize the document, and it is still valid.

– The creation of the Nagorno-Karabakh Autonomous Region Oblast is regarded by Armenians as Stalin`s gift to Azerbaijan. The Azerbaijani side, however, considers that the establishment of NKAO led to many troubles in Azerbaijan…

– Neither Azerbaijan nor Armenia wanted Nagorno-Karabakh to be granted the autonomous status. It was a compromise dictated by Moscow. The Armenians claim that the decision on incorporating Nagorno-Karabakh into Armenia was made on July 4, 1921, however, it was decided to keep the region within Azerbaijan on the next day. The Armenian side also claims that it was pressure from Stalin. The meeting has only minutes, but no verbatim report. Neither protocols nor decision-making process holds Stalin`s name. No document on Stalin`s involvement in adopting the decision is available. Stalin was present in the meeting, but we cannot possess information on his pressure on the sides. These are the assumptions of the Armenian side. On the other hand, the establishment of NKAO violated the integrity of Karabakh. However, at that time, it was a compromise to end bloody conflicts. The Armenians wanted to annex the area. It is no coincidence that the establishment of NKAO created a legal basis for the Armenians to show their claims in the future – after the Second World War, in 1945, in 1956, in 1960. It means that the Armenians did not get satisfied with the NKAO and cherished hope to reach the annexation of the territory at some point. In addition, an unusual situation was set, when the Armenians became the only people to have two political entities in the Soviet Union: the Armenian SSR and Nagorno-Karabakh Autonomous Oblast. The NKAO was a unique entity. Although 70-80% of its population was made up by the Armenians, but the entity`s name did not hold the titular ethnic group. The existence of two Armenian political entities would grow the Armenian territorial claims sooner or later. The decision adopted in 1923 delayed these claims, which were revived in 1945 mainly under the influence Stalin`s relations with Turkey. They hoped to raise the Karabakh issue if Stalin demanded Kars and Ardahan from Turkey. However, the start of the cold war, in which the Western powers sided with Turkey, failed the expectations of the Armenians. Nevertheless, the Armenians were able to keep the political pulse during the Soviet period, especially after the war. During changes in government or during the celebrations of the 40th, 50th, 60th anniversaries of the NKAO, the 50th anniversary of the Soviet Union, the Armenians raised this issue again and again, hoping it will be resolved in their favor.

– So the Nagorno-Karabakh conflict broke out when the NKAO was established, not in 1988?

– I think that the conflict, which has had cold and hot phases, broke out in 1918. The hot phases of the conflict took place in 1918-1920 and later in 1988-1994. The remaining period could be characterized as the cold phase, when the sides had cold relations without an open conflict. The Armenians used to send letters to the Soviet leadership regularly demanding the issue be ultimately resolved. They understood that only Moscow can settle it as the autonomy was established by Moscow.  However, the Soviet regime did not allow the Armenian side to fully raise the Nagorno-Karabakh issue. Even when the issue was raised, the upper circles did not let it develop or go through. The Soviet Union had dozens of such autonomies, and the regime was realizing that revision of boundaries would motivate separatism and cause great damage to the statehood.

– Mr. Niftaliyev, you are familiar with our portal 1905.az. We would like to hear your recommendations to our site.

– I think that the interviews are interesting and should be continued. The website could also be enriched with video footages, books. It would be useful to share not only articles, but also documents, annotations to newly published books. I wish you many successes.

– Thank you very much.

1. Anar Iskandarov: “Armenians created their  image of a miserable nation, but the world defended them” 2. Nazim Mustafa: “Both during the genocide in 1918 and I Garabakh War Armenians attacked from the same directions.” 3. Khojaly – almost 25 years have passed… Boran Aziz: “In general, one of the untouched topics is Khojavand.” 4. Guntekin Najafli: “If Russia could eliminate the Ottoman Empire, there never would be any Armenian state in history” 5. Musa Gasimli: “A quarter of the Azerbaijani population was massacred in Baku in 1918” 6. Vagif Abishov: Books and articles falsifying our history are published in Russia and distributed around the world