Duke Vorontsov-Dashkov: “By Patronizing towards the Armenians we have Gained Loyal Allies who have always rendered us Great Service “. 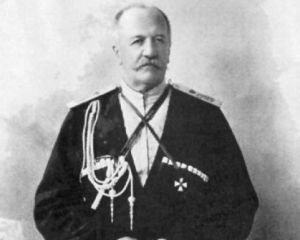 Your Majesty, urged by the clergy consisting of the subjects of Turkey and Russia the Catholicos of all the Armenians wants to leave for St. Petersburg to appeal to Your Majesty  in person and to ask You to defend the Armenians from the attacks of the Kurds in Turkey. I undertook the courage to postpone the visit and suggested him that his request would be delivered to Your Majesty by me.

The concession of İrevan to the Armenians

The decision of the  Azerbaijani National Council about compromising the city of irevan as a political center to Armenians (1918, the 29th may). After the collapse of Southern Caucasian  Seym(1918, the 26th may) the Armenian National Council declared the establishment of Armenian Republic(Ararat) in Tbilisi. The meeting of the Azerbaijani National Council was held in Tbilisi on the 29th may, 1918. According to the N 3 protocol of the meeting, Fatali Khan Khoyski made a report about the results of the discussions held between Azerbaijani and Armenian members of Councils, referring to the territorial issues. Khoyski has noted the necessity of a political center for establishment of Armenian Federation and in addition described the city of Irevan as the only possible and inevitable one, since the Aleksandropol (Gumru) became a part of Turkey. Referring to this idea, many members called it a historical necessity and an absolute misfortune. As a result of the voting, among the 28 members 16 voted pros, 1 cons while 3 held a neutral position (as it reads in the protocol). So the decision of Azerbaijani National Council about the concession of Irevan to Armenia was taken. Fatali Khan Khoysi, The Prime Minister of the Azerbaijan Democratic Republic, was writing on his letter sent on the 29th may to The Minister of Foreign Affairs, Mammad Hasan Hajinskiy “We set stop to all conflicts with Armenians, they will accept the ultimatum and end the war. We have compromised them the Irevan”.

On the meeting held on the 1 June, this case was reconsidered and the objections were declared. The protest was signed by 3 members of Council coming from Irevan. The National Council decided to add the protest to the protocol without and discussions. Despite all evidences that were substantiated, the compromise of Irevan to the Armenia was a huge political mistake.  After the resettlement of Armenian Government from Tbilisi to Irevan (Erevan), they (Armenians) commit massacre against Azerbaijanis, not only in Irevan (Erevan) but even in other historical Azerbaijani lands. Azerbaijanis in Irevan (Erevan) incurred aimed massacre and deportations both of Dashnak (1918-20) and Soviet (1920-91) governments. The Azerbaijani Cultural Monuments located in Irevan (Erevan) got destroyed, the measures in respect of Armenisizing them took place. Starting in the late 1980’s all Azerbaijanies got deported from Irevan (Erevan).

The Encyclopedia of the Azerbaijan Democratic Republic. In 2 edition, II edition, Baku, 2005, p 56