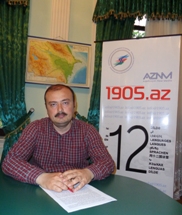 Military and political situation before the occupation

The fragmentation history of Azerbaijan’s territories can be counted from the moment of Peter I’s campaign on the 18th June 1722 to the region situated on the Caspian coast. The main factor that inspired Peter I to this expansionist campaign was the deep political and administrative chaos of the Safavid Empire that also included Azerbaijan for that period of time. Remarkably the economy of the state had collapsed and there were protests from the borders of Dagestan down to the south Afghan province of Qandahar.

Haji Davud who led a revolt and seized a power in Shamakhi in 1721, appealed to Russia but Peter I had left his appeal without any answer. Haji Davud established an independent political unit- khanate and appealed to the Ottoman Empire for help.

The rebellions of the Gilzary tribes in Gandahar had caused some serious problems for the Iranian government. During Mir Mahmud’s tenure (1716-1725) their campaigns considerably expanded to the inner parts of the state and finally by capturing the capital city Isfahan caused the collapse of the Safavid Empire. (Y.M Mahmudov, K.K. Shukurov, “The international affairs of Azerbaijan and the history of diplomacy: Interstate treaties and other foreign political acts of 1639-1828, Baku, 2009, page 63)

For taking advantage of such a favorable condition Peter I decided to occupy the regions on Caspian coast. By realizing this plan Peter I aimed to make the Caspian Sea into an internal sea, to direct all silk trades with Western Europe to the Volga-Caspian trade route and to gain the Ottoman Empire’s profit earned from the silk trade. To achieve this plan Peter I expanded spy networks in the first place. For investigation of the western coasts of the Caspian Sea within the conditions to cross through Azerbaijan and especially caravan roads in Shirvan he sent one of his nearest assistances A.P.Volinski to the Safavid Empire. Ambassador Volinski, obligated to sign a trade contract with Safavid in 1715 in Isfahan, had received some other confidential missions of Peter I, such as to investigate the traveled roads. In 1717 Volinski came back to homeland and described the miserable situation of Safavids and urged him to hurry with the military activities in the way of occupation of the region around the Caspian Sea. (G.Najafli, “The will of the Tsarist Russia to create an Armenian state on the Azerbaijani territories)

As a rule, the news about the situation in Safavid Empire to the Russia used to be received from Christians, especially from Armenians living in the Empire. A Russian historian V.I.Listov writes about the relation of Peter I toward the Christian population in Safavid: Peter I wanted to remove the local population, namely Azerbaijanis from the Caspian provinces and especially from Baku and replace them with Armenian, Georgians and Russian to strengthen his power in the region and to create a shelter consisting only Christians.  Besides that Peter I has sent Capitan Aleksey Baskov to Iran and obligated him to skis the map of the Caspian Sea.

In addition to the spy activities, the Russian emperor had established relations with anti-Iran and anti-Ottoman forces in Caucasus (Georgian tsar VI Vahtang, Maliks of Karabakh, Armenian population of Azerbaijan). Besides all taken measures, the military forces had been organized. Including 32.000 regular infantry and cavalry, an army of 100.000 warriors was assembled.   In the first half of 1722, the warships were gathered in Hashtarkhan and directed to the Gulf of Ehrekhan. The infantry had moved on and met other forces on the way. (Y.M .Mahmudov, K.K.Shukurov, “The international affairs of Azerbaijan and the history of diplomacy: Interstate contracts and other foreign political acts of 1639-1828, Baku, 2009, page 63)

The context of the Manifesto

Alongside with preparation measures a great importance was attached to official propaganda launched to prepare a legal justification for the invasion. The main document reflecting the official propaganda of Peter I was Manifesto, dated the 15th July 1722. To this end, the first printing house using Arabic letters was established in Russia in 1722. There is a note in historical sources about the existing of “floating Turkish printing house” in one of the navies, during the invasion of Peter I.  The Manifesto was consisting of 929 words in total, including an introduction, a text of 73 lines and date of issue. It was written by Kantemir a server in Peter I’s palace who had a very good command of Arabic, Persian, Turkish and Azerbaijani languages. According to the researches made by several scientists in the archives of foreign affairs of Russia, this document was only in Azerbaijani. The Manifesto acted as propaganda and served to the falsification of geo-political goals in the occupation of the region. The campaign of Peter I was described as inescapable because of instability and violence caused by Haji Davud’s revolt, human loss, plundering of merchants, death of Russian tradesmen and the apparent danger threatening their lives and properties.  As it was described in the Manifesto, aim of the campaign was to take revenge from the protestors for the killed merchants. It was particularly noted that there was no will for occupation. It was also emphasized that the safety of local population and people coming for trade will be guaranteed; Russian officers were instructed not treat civilians in any illegal way.

In fact, in the 18th June 1722 troops of Peter I, starting the campaign from Hashtarkhan in the directioin of Derbend, set fire to 6 villages just for frighten the local residents. During the campaign, cities of Derbend, Baku, Salian and Resht were occupied. . According to a treaty signed between the ambassador of Tehmasib II, Ismayil bey and Russia in St.Petersburg on 12th September in 1723 a piece of territories from Derbend to Gilan was officially annexed to Russia. In return Russia promised its support for Safavids in the war with Afghans.

In sum, in 1722-1723 the first stage of occupation of regions around the Caspian Sea was already completed.

1. Historical roots of genocide against Azerbaijanis committed by Armenians 2. Armenia wants the occupation of the Azerbaijani territories to be forgotten with “genocide” claims 3. Is Kiev really founded by Smbat?! 4. On importance of establishing the International Tribunal on Khojaly tragedy 5. How can Armenian overcome facelessness crisis? 6. The Armenians are not autochthonous to the Caucasus