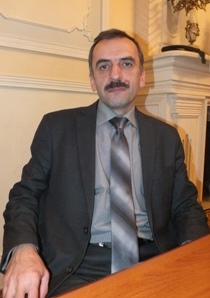 Quite a lot of research has been conducted into the origin of the Armenians and controversial hypotheses have been put forward to this end.

In an attempt to attach ancientness to their own history, several Armenian authors, including G. A. Kapantsyan, S. T. Eremyan and G. B. Caukyan claimed that their ancestors were natives of the Anatolia and the South Caucasus and that the Armenians were descendants of the Prophet Noah. By doing so, they do not substantiate this with fundamental historical facts but only with religious and mythical legends.

They almost all refer to the History of the Armenians by Movses Khorenatsi. The book full of fictional events associates the origin of the Armenians with Noah’s third son Japheth and his descendants: “From Japheth Gomer, from Gomer Tiras, from Tiras Togarmah, from Togarmah Hayk, from Hayk Armenak, from Armenak Aramais, from Aramais Amassia, from Amassia Gegham, from Gegham Harma, from Harma Aram, from Aram handsome Ara was born.” All these are mythical individuals, whose historical existence cannot be proved by facts.

Another group of Armenian authors, such as R. Ishkhanyan, A. Teryan, K. Sukiasian and others put claims on the ancient Urartu culture, although there are no relations between Urartu and Armenian languages. Referring to those, who claimed to be direct descendants of the ancient peoples, Academician B. B. Piotrovskiy noted that “one cannot look for direct ancestors of contemporary peoples in the ancient East”.

Ayvazyan went on and nearly referred the entire Eastern Europe as the homeland of the Armenians. In his Russian-language book The history of Russia. Armenian traces printed in Moscow in 2001, Ayvazyan referred the history of the Slavs to the II millennium, armenized it, made a series of silly assertions that Armenian Smbat Bargatuni founded Kiev in 585, Yuri Vladimirovich Dolgorukiy, who founded Moscow, was not actually a Russian but Armenian Gevorg Bagratuni, Christianity was introduced in the Russian territory by Armenians, the architects of the X-XI-century churches and temples in Kiev and Novgorod were Armenians.

Of ancient authors, Hecataeus of Miletus, Herodotus, Eudoxus of Cnidus also pushed the relations between the Armenians and Phrygians in the foreground. And there is no any serious basis to cast doubts on the data of the ancient authors. As noted by Romanian researcher Vlad Benetianu “We consider it absolutely possible to approve the relationship between the Armenians and Phrygians. The study of ancient history is significantly based on the information provided by serious historians, such as Hecataeus of Miletus or Herodotus. It seems incredible to us that they could give false information when presenting the Armenians and Phrygians as relative peoples. The recent research has repeatedly confirmed the integrity of the information received from Herodotus.

Focusing on the origin of the Armenians, French researcher Georges de Maleville also notes that “the Armenian people emerged in the VII century BC after the collapse of Urartu under the blows of the Assyrians. Perhaps, they were descendants of the Phrygians from the west…”

One of the intriguing points related to the origin of Armenians is the denial of their belonging to the Aryan origin. By referring to D. N. Anuchin, Russian researcher V. L. Velichko considered the Armenians Aryanized people. In other words, the Indo-European origin of the Armenians requires a special study.

1. Historical roots of genocide against Azerbaijanis committed by Armenians 2. Armenia wants the occupation of the Azerbaijani territories to be forgotten with “genocide” claims 3. The Manifesto dated 15th July 1722 of the Peter I for province population on the Caspian coast 4. On importance of establishing the International Tribunal on Khojaly tragedy 5. How can Armenian overcome facelessness crisis? 6. The Armenians are not autochthonous to the Caucasus