Up to the Russian occupations at the beginning of the 19th century the overwhelming majority of the population of the Iravan Khanate were Azerbaijani-Turks. 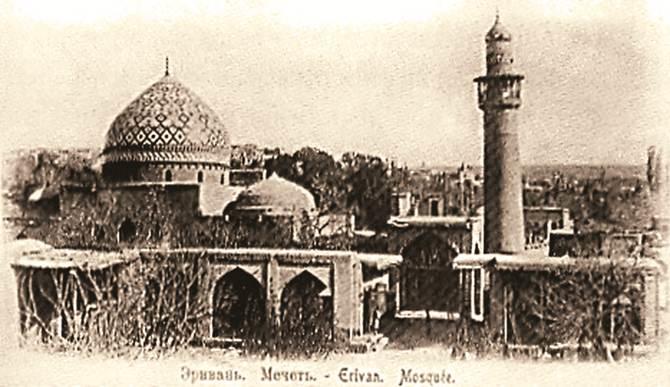 It should be mentioned that until the Armenian church, with its Catholicos (head of the Armenian church) was transferred to the Iravan (Chukhursad ) region in 1441, there were not any villages or pieces of land which belonged to Armenians.The lands of the Azerbaijani – Turks were taken apart, piece by piece, by the Armenians,even in Uchkilsa (Valarshabad (The place-name “Valarshabad” originates from Valar Shah (194-216), the son of Sanaturk (Sanatruk), who belonged to the dynasty of Arshakis ( Arsakhs). This place-name was for a long time known as “Valarshabad” but in Armenian sources it was distorted and became Vagharshabad”.

The foundation of Valarshabad was laid by Valar Shah)) where the Armenian church, with the Catholicos, has been located since 1443.

The Iravan Khanate, an Azerbaijani state ruled by the Khans of the famous Gajars of Turkic dynasty, played an important role in the history of Azerbaijani state governance.The governing system of the Khanate, its social, political, cultural and economic life, and the living standards of its inhabitants, were an integral part of the general historical development system of Azerbaijan, lasting thousands of years. The Iravan Khanate did not differ from other Azerbaijani khanates of the period in its characteristic features of development.

The main part of the invasion plan of the Russian Empire was to occupy the Iravan Khanate bordering on the Ottoman Empire and the Gajars of Iran. Between 1804 and 1813, during the First Russian-Iranian war, there were two major assaults on the Iravan Khanate (July 2 – October 3, 1804; October 3 – November 30, 1808) by Russian troops in order to invade Azerbaijani lands. But the Iravan Khanate did not surrender to Russia and preserved its independence. The population of the Khanate defended its motherland bravely against the tsarist troops under the leadership of the wise and brave statesmen Mahammad Hцssein khan Gajar (1784-1805) and Hцsseingulu khan Gajar (1806- 1827). The Russian troops suffered heavy losses and, in order to occupy the Iravan Khanate, high ranking officials of the Russian Empire made an enticing offer. The commander-in-chief of the Russian troops in the South Caucasus, General Goudovich, on behalf of the Emperor of Russia, said that if Hassan khan Gajar, the brother of the vicegerent of Iravan (Husseingulu khan-editor), willingly surrendered the fortress, he would be set free and appointed the ruler of the whole Khanate, apart from the fortress and the city of Iravan.( Акты, собранные Кавказской Археографической Коммисией (АКАК), т.3, Тифлис,1869, document 447,p.239-240 ) Hassan khan Gajar rejected this offer from the Emperor of Russia.

Tsarist Russia also benefited from the assistance and betrayal of Armenians at state level in the occupation of Azerbaijani lands. For example, a special item was included in a decree of that time issued by the Tsar: “ …You are authorized by all possible means necessary, to treat Armenians kindly for their support to us.” (АКАК, т.1, Тифлис, 1866, document 548, p.436)

Despite all of this, the Russian Empire could not occupy the Khanates of Iravan and Nakhchivan during the First Russian – Iranian war. The local, patriotic Azerbaijani population of both Khanates struggled bravely for the liberty of their motherland and defeated the invaders and Armenians who were supporting them.

Nicolas I did not give up the Iravan Khanate as a loss.Taking into consideration the military and strategic importance of the occupation of the Iravan and Sardarabad fortresses, he often reminded General Yermolov of this point. On October 21, 1826 the Russian Emperor wrote to Yermolov: “If it is possible to occupy Iravan, whether by the help of guns, bribing the vicegerent of Iravan, or by making confidential friendly terms with him, don’t miss an opportunity” (Шербатов М. Генерал фельдмаршал князь Паскевич.Его жизнь и деятельность, т.II, СПб.,1890,с. 122)

During the Second Russian-Iranian war (1826 -1828) Tsar Nicolas I (1825-1855) gave special priority to the occupation of the Iravan Khanate and in his decree issued on the 1st August, 1826, he gave a special task to the invading General Yermolov: “Attack the Vicegerent of Iravan urgently. Waiting for this prompt response from you: Thank God there is no vicegerent anymore and the Iravan Khanate is completely invaded. You and 15 thousand Russian troops are enough to gain victory.” (Записки Алексеевича Ермолова (1816-1827),ч.II, Москва,1868,с.214; See: chapter 8, document 3)

Heroic protector of the Iravan Fortress, Hassan khan, had placed a burning fuse in the gunpowder tower in order to blow up the fortress at the last moment.

However, an act of betrayal worked. The Armenians contacted Paskevich, who had encircled the fortress, and told him where the Azerbaijani troops were located, in which direction they should fire their canons. (Ениколопов И. Грибоедов и Восток, Ереван,1954,с.85-86)

Benefiting from the Armenians’ betrayal, Paskevich, the command erin-chief of the Russian troops, seized the Iravan Fortress and invaded the khanate.

For this “victory“ he was awarded the title of Count (Шербатов М. Ibid.p.330. ), second degree of the “Cross of Saint George“, a money award to the amount of one million roubles and the title of “Erivanski”. (Потто В.А. Кавказская война в отдельных очерках,эпизодах, легендах и биографиях,т.3, вып.1-4, СПб.,1886, с.591) The seizure of the Iravan Fortress was celebrated in Saint Petersburg with a special official parade and special medals were struck. V.Potto chronicled in detail what witness had told him about the ruin and damage to the city caused by the invading Russian troops: “When I reached the south-east corner of the fortress, I was shocked by the ruins of the walls and the towers. It seemed to me that what had been done by the Russian artillery in four days to the encircled fortress, could not have been done by God in four centuries.”(Потто В.А. Ibid., p. 516)…

From book “The Iravan khanate: The Russian occupation and the relocation of Armenians to the lands of North Azerbaijan”. 2010, Баku, p.18-22

1. Armenian Nationalism and Territorial Claims 2. Khachatur Abovyan: “Our language consists of at least 50 percent Turkish words” 3. Diplomatic struggle around Karabakh and Zangezur under the ADR (1918-1920) 4. On the origin of the Armenians 5. THE ARMENIAN AFFAIR 6. Transformation of the South Caucasus into a new polygon of Armenian extremism in the late 19th and early 20th century