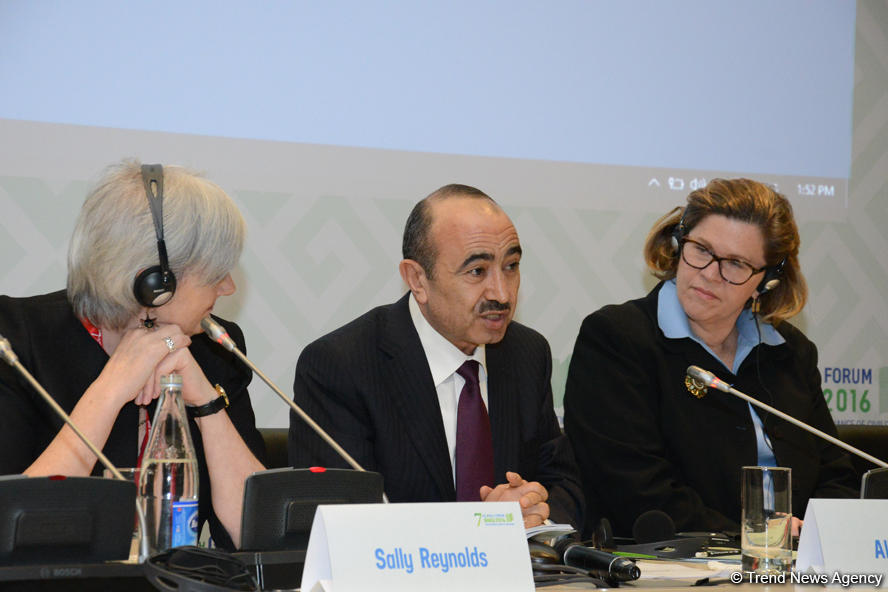 For over 20 years, Armenia hasn’t been fulfilling the four UN resolutions adopted on the Nagorno-Karabakh conflict, said Ali Hasanov, the Azerbaijani president’s aide for public and political affairs.

“So if a country doesn’t fulfil the resolutions adopted by the global leadership, is there a guarantee that the journalism in that country will voice an unbiased opinion?” asked Hasanov addressing the session titled “Media Literacy: Tools for Building Resilience to Violent Extremist Propaganda”, held as part of the 7th Global Forum of the UN Alliance of Civilizations in Baku.

Journalism will continue to serve to biased interests unless a single code of journalist ethics is adopted in the world, added the top official.

Hasanov noted that despite the talks about independent journalism, the transnational and other media agencies serve to the social, national and business interests.

“This is reflected in the conflicts in the post-Soviet area,” he added. “Look what is happening today in Syria. Western media are creating a view that Syrian President Bashar al-Assad is committing genocide against his people, waging a fight against it. Meanwhile, the Ukrainian journalism and the journalism of other countries have varying approaches to what is happening in Ukraine.”

“This situation will not change unless a single code for journalism is adopted at international level,” added Hasanov.

He further pointed out that Azerbaijan has a tolerant society and promotes tolerance.
“However, yesterday [Apr. 26], Armenian media called for refusing to accept the Baku Declaration,” he said. “Therefore, it is necessary to ensure that the journalists working at BBC, CNN and Azerbaijani media approach issues based on single principles and a single code.”

“I believe that after this event, Azerbaijani journalists will use the ideas advocated at the forum,” said Hasanov.

Azerbaijan supports the spread of the ideas of humanism and pluralistic media, added the top official.

The presidential aide noted that those who commit violence shouldn’t have an opportunity to evade the law.

He said that sometimes, young people in the developed countries, for example in the US, commit violence in order to become famous.

“For instance, recently, a young man in the US killed 20 people in a school, saying that he wanted to become famous,” he said. “Being state officials, we put efforts to prevent the spread of such negative cases in the society.”