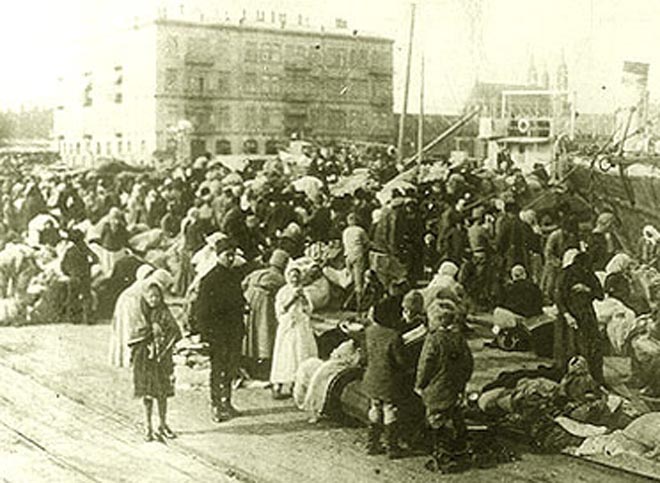 As a result of this policy pursued by the Armenian nationalists at all times in history the Azerbaijani Turks were driven out from their native homes and deprived of the land and the hearths. Armenian nationalists who resorted to inhumane forms of struggle have made serious attempts to realize their intentions and have used various tactical methods to achieve their goals. Especially, in the 20th century our people suffered severe hardships, national tragedy and torments as a result of purposefully conducted ethnic cleansing, deportation and genocide policy against the Western Azerbaijan Turks. This insidious policy, supported by the anti-Azerbaijani circles, from time to time has been provoked by open provocations, or even with exceptional cruelty through national massacres and wars. As the National Leader H.Aliyev said, as a result of this inhumane policy realized step-by-step, Azerbaijanis were expelled from their native historical-ethnic lands, subjected to slaughters and massacres, thousands of historical monuments and dwellings belonging to our people have been destroyed.

The policy of deportation of Azerbaijanis from the territory where they historically lived had been systematically implemented throughout the 20th century and had been an action raised to the level of the genocide unseen in the world history. The deportation of the Azerbaijanis also within the Soviet Union continued with new methods, and in the years following the Second World War, this policy was carried out with severity.

Historical facts show that deportation and genocide crimes committed by Armenians against Azerbaijanis had become more widespread, and deportation policy had been more organized and more ruthless. Thus, the tragic epoch of the history of our Homeland has been drawn into historical research work; the elimination of mistakes and distortions in the study of this area has become the main goal. As a result of the research, the following generalized outcomes were obtained:

1.Since for many years the history of our people in Azerbaijan was “illuminated” on the basis of scientific communist ideology, historic studies were conducted one-sidedly, historical facts were deliberately falsified and the issue of Azerbaijanis’ deportation was not studied. The policy of oppression against the Turks and the deportation and genocide committed by Armenians during the Soviet era were concealed.

2.The history science and practice of scientific researches in this area show that it is possible to come to the objective conclusions when the historical events and processes are studied in complex in the specific historical circumstances where they occur, taking into account internal and external aspects. During the research all these terms were kept and in the study of these events and processes historical approach and objectivity were taken as a basis.

4.Azerbaijan historians have touched issues related to the problem in some way, have revealed many facts and have uttered valuable ideas. All these opinions have had great scientific and scientific-methodical contribution in the research process. However, the history of deportation covering the 1947- 1953 years has not been studied extensively in the context of historical events until now. Therefore, the study of the main line of the thesis – the investigation of the 1947-1953 years’ history was our main task.

5.As a result of the research, it became clear that the deportation of the Azerbaijani Turks from Armenia in 1947- 1953 years was related to the “Armenian issue” put on the political agenda in the context of the USSR-Turkey relations in the post-World War II era. Since the territorial claims of the USSR against Turkey, the territorial claims of the Armenians against Turkey and Azerbaijan and the deportation of the Azerbaijani Turks from their historical and ethnic lands were closely connected they should be investigated integrated. This approach clarifies the responsibility of the idea movers, organizers and implementers of the 1947-1953 years deportations.

6.The Soviet government and its intelligence agencies were the ones who allured Armenians to resettle from abroad to Armenia and implemented it. With their help, various Armenian organizations put forward extensive territorial claims against Turkey and acted in this direction. The aim of relocation of Armenians out of the country was to persuade the Armenians that the “lost lands” would be returned, and to insure the Soviet territorial claims through Armenians. The relocation of Armenians from abroad at the end led to the eviction of Azerbaijanis from their historical lands. The Soviet leadership I.V.Stalin being at the head, under the name of “improving the socio-economic conditions of the Armenians relocated from abroad”, decided to move Azerbaijanis. In fact, there was no social and economic reason for that. Thus, the head of Armenia, Q.Arutyunov, noted “the possibility of resettlement of 400-500 Armenians in the republic”. All these are widely covered in the monograph.

7.Although as the official reason for the resettlement was stated in the decision that after the Mingechevir Hydroelectric Power Station was put into operation, it was planned to expand cotton-growing and to provide the Kur-Araz lowland districts with the manpower, however, the USSR Council of Ministers’ decree on “The transfer of collective farmers and other Azerbaijani population from the Armenia SSR to the Kur-Araz lowland of the Azerbaijan SSR” issued on 23 December 1947, was of political nature. All decisions, decrees, orders and instructions relating to the deportation of the Azerbaijani Turks were carried out under the name of “classified” and “top secret”. It was intended to cover the forced eviction and violence of the Azerbaijani Turks and to conceal the true essence of deportation.

10.The deportation of the Azerbaijani Turks was carried out on the ground of the historical and ethnic hostility of the Armenians against the Azerbaijanis and was sometimes accompanied by open, sometimes covert resistance of the settlers to the policy of relocation. This fact is also confirmed by the confidential information on “The Relocation Moods”, which was addressed by the Minister of Internal Affairs of Armenia H.Grigoryan to M. Bagirov on May 3, 1948. The covert and open resistance of the Azerbaijani population manifested itself in the following forms; 1) refusing to leave their historical and ethnic lands, stating that the relocation is voluntary; 2) refusal to work in the public sector; 3) destruction and destroy of personal property; 4) open resistance against relocation (in the case of Lambeli); 5) attempts to settle in foothill regions favorable for them, but not in the Kur-Araz lowland with sultry climate; 6) resettlement of tens of thousands of Azerbaijanis not according the resettlement rules, but spontaneous, massive migration; 7) return of Azerbaijanis to their place of residence. All these are shown in the monograph with facts.

11.The Armenian lobby, “Hnchak”, “Ramkavar”, “Dashnaksutyun”, Armenian Communist Party, Echmiadzin Church and other organizations actively participated in the deportation of Azerbaijani Turks from their historical and ethnic lands. The close cooperation of these organizations with the Soviet leaders and the State Security Committee played a crucial role in the implementation of the criminal political acts against the Azerbaijani Turks.

1. In 1935-1989 thousands of the Azerbaijani toponyms were erased from the map in Armenia 2. Luigi Villari: “The Azerbaijani population of Yerevan was richer than the Armenians” 3. Over 90,000 foreign Armenians replaced deported Azerbaijanis 4. The establishment of “Armenian province” and initial deportation of Azerbaijanis 5. Quoting Zaren Karkadyan: “Until 1820 Azerbaijanis lived in 2000 of 2300 settlements on the area of now days Armenia”. 6. Muslims expelled from Iravan and Daralayaz regions were replaced by Armenians brought by Andranik