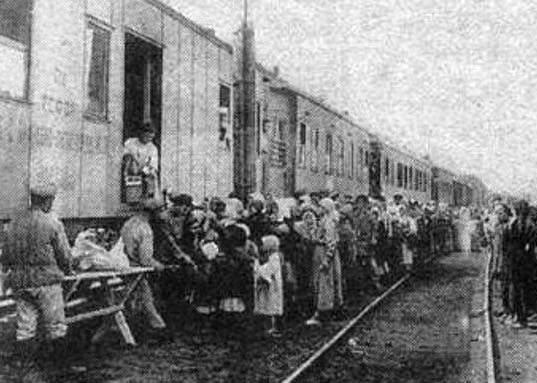 Armenians took advantage of the situation alleging that a lot of Armenians wanted to move into Armenia but territories were insufficient and therefore, they raised with the Kremlin leadership the issue of relocating Azerbaijanis from their native lands to Azerbaijan. For its turn, Moscow immediately consented to this plan and throughout 1947-1953 years, over 150,000 Azerbaijanis were deported from lands where they lived for centuries. Over 90,000 Armenians were relocated to replace the deported Azerbaijanis.

Thus, the tradition of multiplying Armenians in the territories called “Armenia” continued with the help of relocating Armenians from abroad. The majority of the relocated Armenians settled in cities, while most of the villages of the deported Azerbaijanis remained empty. The key objective was not to prepare settlements for Armenians from abroad but to deport Azerbaijanis from there. The process continued under various pretexts during the Soviet empire.

In parallel with deportation of Azerbaijanis from territories called “Armenia”, Armenians were trying to realize their ungrounded claims on Nagorno-Karabakh. At the outset of 1960s, the relations between the Soviet empire and Turkey deteriorated, and Moscow kicked off large-scale anti-Turkish propaganda. Armenians took advantage of this situation and placed on the agenda the issue of self-styled “Armenian genocide” and renewed claims on Nagorno-Karabakh.

For the purpose of serving his fellow tribal members, A. Mikoyan, master of intrigues and a member of the then Kremlin leadership, raised the issue of annexation of Nagorno-Karabakh by Armenia. Fearing this proposal might cause a danger for the empire and territorial claims might pop up in other regions, the Soviet government turned down this suggestion. Pointing at Armenians’ insidious intent, the Kremlin leader N. Khrushchev said that “I am ready to allocate 12,000 trucks” if Nagorno-Karabakh Armenians wanted to join Armenia.

In 1965, Armenians sent a new appeal with signatories of 45,000 people to Moscow, requesting annexation of Nagorno-Karabakh to Armenia. At that time, emissaries from Yerevan were engaged in propaganda in Khankandi, trying to collect signatures. But despite all efforts of Armenians, the majority of Karabakh Armenians refused to sign the petition. The signatures under the petition dispatched to Moscow belonged mainly to Armenians living on territories called Armenia.

The beginning of the on-going “genocide campaign” was initiated by the Kremlin leadership in 1965 to mark the 50th anniversary of the fictional events. True, Moscow was suspicious about this issue. Probably, the Soviet leadership did not even think of Armenians to drag this rotten idea out for such a long period.