“Report on the utter destruction of the town of Guba and the villages of the Guba uyezd and the violence committed against the inhabitants of the mentioned town and settlements.” 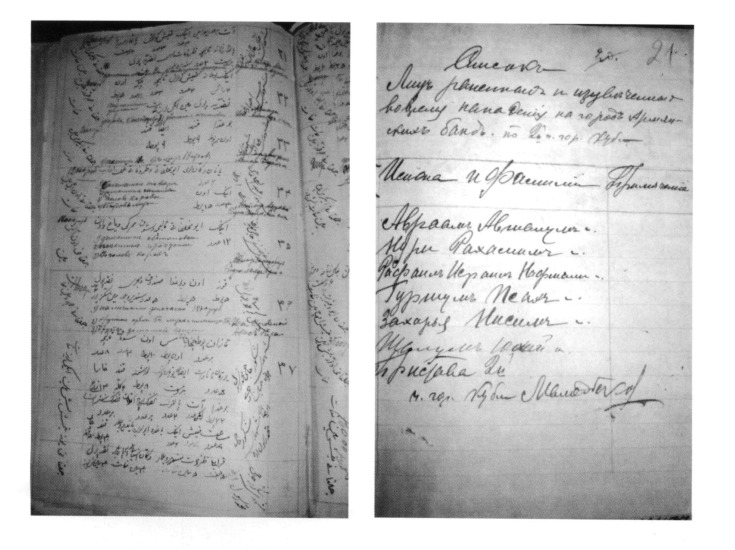 In the month of April of 1918, when the Bolsheviks held Baku and the Baku province, David Gelovani of the Bolshevik party arrived in Guba with a squadron of 187-armed soldiers and declared himself the Uyezd Commissar of Guba. Pie suggested that the population should immediately recognize the Soviet authorities. Guba residents fulfilled this order. Gelovani began to introduce the Bolshevik power in the city. He learned of peace attitude of the Guba Moslems and released up to 200-interned Armenian prisoners from jail, as he knew that Moslems could not represent any danger to them.

The next few days were quiet. All of a sudden, Lezghis from the neighboring villages approached the city from the mountains and offered Gelovani to abandon the city with his squadron or give up. Gelovani rejected this suggested. Lezghis started to fire the city. This led to a skirmish, which lasted for several days. A squadron of soldiers with one gun and machine-guns arrived to support Gelovani. Nevertheless, Gelovani still had to abandon the city. As he was leaving, he forced the Christian population, mostly Armenian, to leave. The Lezghis followed and fired the retreating troops. Several persons of peace Christians were killed in the skirmish, namely Armenian Machak Kasparov, Armenian priest Aleksander Bogdanov, Duhol Pogosov, Russian Orthodox priest, chemist Golubchik, excise official Polesny, forest warden Abrosimov, doctor Michels and many others. Gelovani retreated with his squadron and Christian population. The life in the city was quiet after that. Armed Lezghi troops, which forced Gelovani to abandon Guba, dispersed to their houses.

Approximately two weeks later, news came that a large squadron of soldiers with guns and machine guns was approaching Guba from Baku. Some of the residents left their properties in the city and escaped to the forests, while others remained, because they did not allow the idea that the squadron could represent any kind of danger to them. The squadron, headed by a famous dashnaktsakan Amazasp and his assistant Nikolay, was composed exclusively of Armenians. It surrounded the city on May 1st 1918 and began to fire it from guns, gun machines and rifles. This led to a terrible panics and chaos. The squadron entered the city unimpeded. The seizure of the city was accompanied by fierce beating of the Moslem population and various kinds of violence over them. Armenians were merciless to men, women and children in the city streets; they broke into houses and murdered whole families without any mercy for infants, who were shot and knifed dead on the breasts of their mothers. Among such victims are Kerbalay Mamed Tagi oglu with his family of 14 members; Magomet Rasul oglu with his family of wife and three children – he had his abdomen unstitched, and heads of children were cut; Haji Dadash Bala-Kasum oglu with his spouse Meshadi Bibi-Hanum and son Abdul Kasum, who were burnt in their house; Hokima and Busta – two daughters of Kerbala Abuzar Mastan oglu, who were knifed to death on their mother’s breast; Meshadi Gambar Molla-Magomet Salekh oglu with his wife and several infants. Among other killed persons are Molla Shahbaz, Usta Magomed Rasul Bayram oglu with his son, Meshadi Musa Zeynal oglu, Meshadi Ali Meshadi Fayzulla oglu, Kerbalay Dadash Bagir oglu, Jabbar Mamed Ali oglu, Saiba, Safar-Ali Meshadi Talib oglu, Meshadi Musa Zeynal oglu and others. There were cases of tortures and mockery, for instance honorary old men were ordered to deliver Moslem women to soldiers. Ali-Pasha Kerbalay Magerram oglu and his son were killed because they refused to fulfill the order, the latter was thrust with bayonet in the eyes of his father and had his eyes put out and face and abdomen cut. Nearly two thousand men, women and children were killed. Armenians raped up to one hundred Moslem women and girls, whose names are kept secret by relatives. The property of Moslems was stolen. Public activists calculated that Amazasp squadron stole four million roubles in cash, gold, gold products and jewelries worth four and a half million, various products and food products worth twenty five million roubles. Besides, Amazasp squadron burnt one hundred and five houses and buildings in Guba, which belonged to Ibrahim-bek Shikhlarsky, Meshadi Aliy Huseynov, Orudj- Aliy Ahmedov, Bekir Megraliyev, Sattar Mamedyarov, Gidayat Amirbeyov, Gafar Orudjiyev, Ali-bek Zikiksky, Radjab Orudjev, Yusuf-bek Abusalambeyov, Iskender Abdullayev and others. They also burned houses where Moslem establishments were located. The victims suffered damages worth one hundred million roubles from the burning.

It follows from Gelovani’s reports that Amazasp squadron was sent to Guba for the purposes of punishment at the desire of commissar Shaumyan, without the knowledge and consent of other commissars. Military commissar Karganov made the squadron and the squadron consisted of two thousand Armenians who were the members of Dashnaktsutun party. It was headed by a famous dashnaktsakan Amazasp. Venunz served the functions of the squadron commissar. The squadron was named the punitive and did not pursue any political objectives.

Amazasp himself in his speech to Guba residents recognized this fact, as he said: “I am a hero of the Armenian nation and an advocate of its interest. I was sent here [to Guba] with a punitive squadron to have my revenge for those Armenians who were killed here two weeks ago. I was not sent here to introduce peace and order or establish the Soviet power, but to have the revenge for the murdered Armenians. I was instructed to murder all Moslems from the sea coast [Caspian] to the Shah Dag [mountain in Dagestan] and to raze your houses to the ground, as we did in Shirvan [Shemaha] to have the revenge for our Armenian brothers who were killed by you and the Turks, but I had my mercy on you”.

At the base of the foregoing, I suggest to institute criminal proceedings on charge with violation of articles 13, 129, 927, 1633, 1453 and 1607 of the regulations on punishments against the members of the punitive squadron of Amazap, who devastated the city of Guba and 122 villages of the Guba uyezd, namely Amazasp, his assistant Nikolay, commissar Venunz, Arutun Ayrapetov, barber Jevad, Avakovs, Amirjanovs and others. Criminal proceedings shall not be instituted against former commissars Shaumyan and Karganov who died.