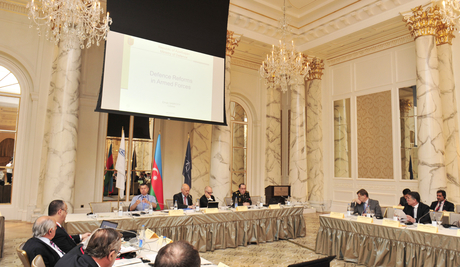 Armenian delegation engaged in provocation against Azerbaijan was called for order

The Armenian delegation was called for order at the 86th NATO PA Rose-Roth seminar titled “The South Caucasus: Challenges and Opportunities”, APA reports.

Making a speech at the seminar, head of the Armenian Delegation to NATO PA Koryun Nahapetyan began to openly accuse Azerbaijan. He said the military budget of Azerbaijan has increased by 20 times over the last seven years and attempted to regard it as a threat to the region. Nahapetyan demanded a strong reaction of the organization in this regard.

Later on, Armenian MP Tevan Pogosyan accused Azerbaijan of instigating the Karabakh conflict. Trying to falsify historical facts, Pogosyan said a large amount of weapons and ammunition allegedly remained in Azerbaijan on the eve of the collapse of the Soviet Union and Baku began to threaten Armenians benefiting from these weapons.

Moderator Todor Tagarev asked the Armenian delegation to stop the repeated accusations and warned that it is contrary to the seminar program.

In his turn, Head of the Azerbaijani delegation to the NATO PA, First Deputy Speaker of the Parliament of Azerbaijan Ziyafat Asgarov said that the Armenian delegation has been making a provocation in Baku, acting for some purpose under the name of seminar. In this regard, he warned the organizers of the seminar: “The course of the seminar showed that the Armenian delegation deviates from the agenda and attempts to blacken Azerbaijan at the NATO PA. I tried to explain to them that if the matter is the increase in Azerbaijan’s military budget, there’s a notion called Gross Domestic Product (GDP) in the world economy. If they’re unaware, let them go and check that out. That is, if Azerbaijan’s GDP has increased by some 10 times since the early 1990s, then it must have similarly influenced all areas, including the military budget. Apart from all of these, dear Assembly representatives, I’m asking you, should a state whose 20% territory is under occupation increase its military budget or not? The Armenians won’t answer it frankly anyway. It’s no secret that they’ve come here for a different purpose. But let’s together ask the Armenians about this truth: When are you going to liberate the Azerbaijani lands that you occupied? We expected that you, as a man of political morality, would possible apologize for it here. Because you committed the Khojaly genocide as part of the occupation, committed more than 30 terrorist attacks in a range of public places in Azerbaijan. If you don’t believe me, go and have a look at the list of Armenian officers wanted by Interpol. Why don’t we highlight these, too? Why don’t you ever speak of this? Dear Armenian counterparts, you’d better speak of Armenian terrorism. Because it’s something you know very well. Because terrorism is a state policy in Armenia today. And the Serzh Sargsyan who is pursuing this policy is the number one terrorist in the region”.

Ziyafat Asgarov called on the NATO PA to pay attention to all of these and comment on the facts he put forth as well, if this subject opens at the seminar: “Otherwise, what is going to change by coming and holding a seminar here just for the sake of holding it? NATO, cooperating with us, should first learn about Azerbaijan’s problems and see who we are neighboring with, then you can talk about the subject of stability as much as you like”.

1. English military journalist about Armenians and Dashnaks 2. Geyche and Dilijan regions in 1922, 9 villages of Nakhchyvan in 1923, Mehri region in 1929…were given to Armenia 3. Until the Armenian church, with its Catholicos was transferred to the Iravan region in 1441, there were not any villages which belonged to Armenians 4. Can Armenians claim for Hayasa? 5. The Armenians` Urartu claims 6. THE ARMENIAN AFFAIR