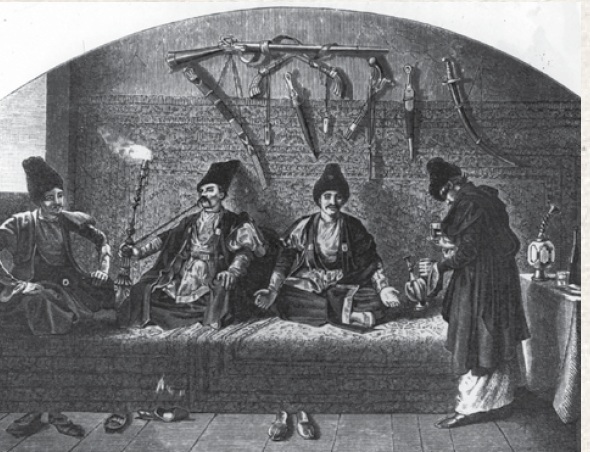 During the formation of the Azerbaijani khanates, only the Karabakh khanate built a new city as an administrative center.

The representative of the Javanshir tribe, Panahali Khan, first built the Bayat fortress as a residence, but it did not justify itself as a military fortification, and then the khan decided to build a more powerful and inaccessible stronghold. For this purpose, the ancient village of Shusha, surrounded by steep cliffs and forests, at an altitude of 1,400 m above sea level was chosen. Established in the second half of the 18th century, the new city soon became one of the leading economic and cultural centers of the South Caucasus, having bypassed many ancient Azerbaijani cities in this respect. The process of settling the city was also original, and at first it was settled by noble families and artisans, but in due course immigrants from other, often remote places began to flock here forming separate quarters – from Tabriz, Aylis, and Julfa. In Shusha, a specific, refined culture was formed, the creators of which were the most diverse social strata – noblemen, traders and artisans. The particularities of the formation and settlement of the city naturally affected urban planning: each quarter built its own mosque, bath, madrasah and other social institutions of the time.

An important factor in the development of Shusha was its status as a fortified stronghold. Sources indicate that until 1797 the enemy never entered these walls. The security situation furthered the active development of the city: many caravanserais, mosques, tombs and other valuable works of architecture were erected in Shusha, including such famous architectural monuments as the Khan’s palace and the Govhar-aga mosque. The same period saw the works of the remarkable 18th century Azerbaijani poet Molla Panah Vagif, whose creations went around the entire Muslim East.

After the annexation of the South Caucasus by Russia, the Karabakh Khanate was abolished. However, Shusha retained its administrative status, first acting as the center of a military district and from 1841, as a district center. The importance of the city as an economic center grew: silk fabrics, carpet weaving, and winemaking developed here. By the end of the 19th century there were up to 2,000 artisans in Shusha.

Shusha also became a significant cultural center of the South Caucasus. Back in 1801, at the Ibrahim Khan mosque, a school was founded, which already operated in the second half of the 19th century. In 1830, the first district school in Azerbaijani lands was opened in Shusha. In the opening of public libraries, the championship in Azerbaijan belongs to Shusha along with Shamakhi. There was a small printing house in the city.

In Shusha, there were a number of literary meetings, Majlises, headed by such prominent Azerbaijani poets as Mir Mohsun Navvab, Khurshidbanu Natavan and others. Navvab was also known as a skilled calligrapher and ornamental artist, and Natavan as a calligrapher, master of artistic embroidery and a painter.

In 1848 the first theatrical performance was organized in Shusha, and in 1882 the city became an important theater center. Among the Shusha theater-goers there were such outstanding figures of Azerbaijani theater art as the first translator of “Othello” into Azerbaijani, comedian Hashim Vazirov, famous playwright Abdurrahim Hagverdiyev, literary critic Firidun Kocharli, wonderful folk singer Jabbar Garyagdi and others. In 1904, Shakespeare’s tragedy “Othello” was staged for the first time on the Shusha stage.

Shusha has long and deservedly enjoyed a reputation for being the “conservatory of the Caucasus”. This city is the cradle of Azerbaijani musical culture, and a professional school of performing and instrumental music formed here. Many Shusha performers have gained fame far beyond Azerbaijan. In 1897, A. Hagverdiyev staged Fuzuli’s poem “Layla and Majnun”, and in 1902 – Nizami’s poem “Khosrov and Shirin”, and in both performances the main parties were performed by the great G. Garyagdi. In 1901 an “eastern concert” was organized in Shusha for the first time – a new form of concert, which played a big role in the birth of Azerbaijani opera art.

In 1898, a city council was established in Shusha, which played an important role in the social, economic and cultural development of the city. Members of the council were such prominent cultural figures as A. Hagverdiyev, H. Vazirov and others. On February 17, 1900, appeals for equalizing the Muslim population of Shusha with Christians in the election of councillors to the city Duma were sent by the chief civilian manager of the Caucasus to the Economic Department of the Ministry of the Interior.

In 1904-1907, when the post of mayor was occupied by Javad-bay Safaralibayov, Shusha turned into a center of political thought in the South Caucasus, and the city was mentioned in the reports of the police department in connection with the Armenian-Azerbaijani skirmishes. This is what the prosecutor’s statement about the events of July 12-23, 1906, says: “… on July 21 shooting… arranged by the Armenians began again, and on July 23 it died down. Victims were Tatars who had 104 houses burned down, 31 people killed and about the same number wounded… Armenians were better prepared and organized: they had leaders and detachments with heralds and nurses.” In the Yelizavetpol governor’s report referring to 1905, we read: “In August, riots took place throughout the entire Yelizavetpol province, especially in the town of Shusha, which has a great influence on the four southern districts. During the clashes, about 200 houses were destroyed, while the number of the dead and wounded reached 250.”

It should be emphasized that at the beginning of the 20th century Shusha became one of the centers of the rise of the national self-consciousness of the Azerbaijani people. The Geyrat group, formed in Ganja, enjoyed authority there. The largest branch of the national-patriotic party Difai was the “Council of Unity of Karabakh”, the main committee of which was located in Shusha. The chairman of the council was Abdulkarim-bay Mehmandarov, who graduated from the St. Petersburg Medical and Surgical Academy in 1877 and worked as a city and county doctor of Shusha. In the early 1900s, a city hospital opened in Shusha.

With the beginning of the Armenian-Muslim massacre in 1905, all of Karabakh became an arena of interethnic confrontation provoked by Armenian nationalist groups. The Azerbaijanis were killed and robbed, and their homes were ruined. In 1918, events largely turned into genocide against the civilian Azerbaijani population. But with the formation and strengthening of the Azerbaijan Democratic Republic and the establishment of the governor-general’s office, stability was established in Karabakh, which allowed for socio-economic reform. However, in March 1920, Armenian nationalists rioted again, the 11th Red Army invaded after two months, and on June 15, Soviet power was proclaimed in Shusha.

As a result of deliberate steps by the Soviet leadership, the “Nagorno-Karabakh Autonomous Region” (NKAO) was created in the upper part of Karabakh in 1923. It was conceived as an Armenian autonomy within Azerbaijan and presented as the “self-determination” of the local population. Shusha was included in the new formation, but contrary to the previously adopted decision, not as a regional center. Nevertheless, the city continued to play the role of an important economic and cultural center not only of the NKAO, but also of a vast region. In 1977, Shusha was granted the status of an architectural reserve.

Shusha people are people with a special character, bearers of that exquisite, elite culture that has formed in this extraordinary city since its inception. This gives them a specific character, which is sometimes perceived as arrogance, but in fact it is simply the pride of the Shush resident…

May 8, 1992 is a black date in the history of the “conservatory of the Caucasus”, which was occupied by the Armenian forces. Since then Shusha people have dispersed in different cities and towns. For 22 years now Shusha has been under the heel of the enemy, but its true masters continue to live with an unshakable hope that the day will come when they will return to their native city. This hope is supported by the categorical and principled position of the Azerbaijani government, formulated by Heydar Aliyev: there is no Karabakh without Shusha, there is no Azerbaijan without Karabakh. The hope and purposeful activity of the Azerbaijani state form the energy that will bring Shusha back to the Motherland.