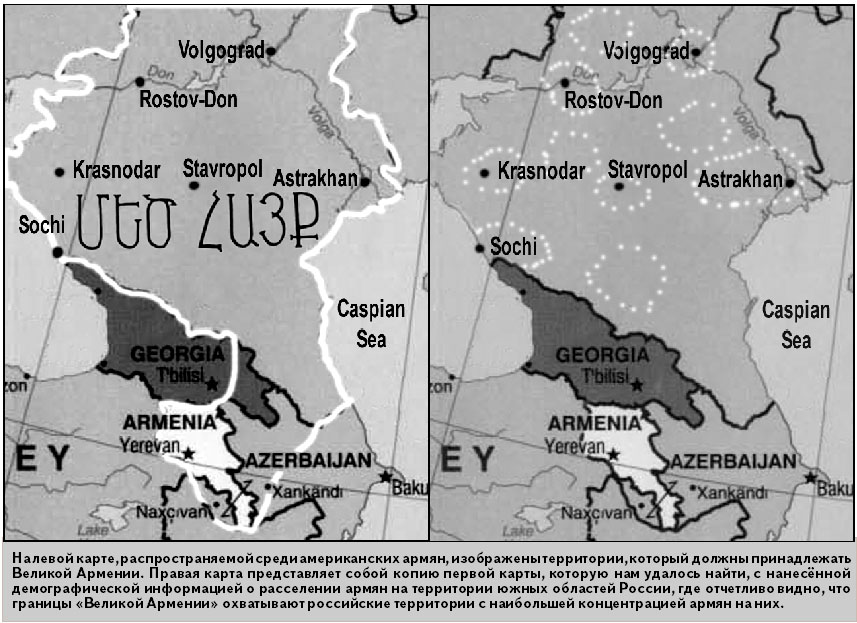 We have recently come across an intriguing document – a map with the southern part of Russia and the neighboring Caucasus republics. This map was sent to us by our friend – an ethnic German who now lives in the USA. A letter is also attached to the map and we’ll talk about it a bit later. Even if we look at the document superficially, we can easily see how extraordinary Armenia’s territory on the map is.

The document we obtained shows wider regions of the southern Russia as an integral part of Armenia. Unidentified authors portray native Russian lands of Krasnodar, Stavropol, Volgograd, and part of Rostov Region as the Armenian territories. We should also underscore that this strange geographical description also contained writing, as we clarified it later, in Armenian language.

Copying these symbols, we appealed to an Armenian, unsuspecting of anything, and asked him to translate the text into Russian. This is how the translation reads: “Great Armenia”. The attached letter said that the map was being distributed among the multiple Armenian Diaspora in America. Emissaries from Armenia are asking their American compatriots to give big sums of money for the realization of the “Great Armenia” project. This material caught our interest and we began our investigation…

…Now we are to interpret our investigation connected with the “Great Armenia” project that Armenians have been making efforts to realize it for over 200 years. In 1826-1828ss, when the Caucasus was not yet completely under the Russian rule, 40,000 Armenians from Iran, and 84,000 Armenians from Turkey were resettled in this territory. The best lands of Tbilisi (Tiflis), Yelizavetpol and Iravan (Yerevan) provinces were allocated to Armenians. A total of 20 dessiatinas of land to the tune of R2m were bought from Muslims for the resettlement of Armenians.

Following this generosity, another 50,000 uninvited Armenians flooded into the southern Russia. All these happened during the rule of Nikolay I. After the Crimean war with Turks, the Russian empire occupied Black Sea coasts at the expense of huge losses and Armenians were resettled in these territories from the Asia Minor. These events occurred during the rule of Alexander II. After the 1877-1878 victorious war with Turkey, the empire added two more territories to its territory in the Caucasus.

For example, a total of 90,000 Armenians alone were resettled in Kars willfully. Army General Ter-Gukasov misused the benevolence of the Russian tsar and resettled 35,000 Armenian families in Surmeli County. At that time, Caucasus Governor Count Sheremetyev was insistently asking the government to move undesirable newcomers out of the southern Russia.

However, Turkey – well-versed about Armenian treachery was refusing to take them back. The new viceroy of the Caucasus duke Gallitzin discovered that 300,000 Armenians settled willfully in 1897. Taking advantage of unprecedented hospitality of Russia, shameless Armenians were trying to settle in southern Russian territories unrelated to the Caucasus.

In early period of the reign of Nikolay II, the southern territories of the Russian empire saw the influx of Armenians. Naturally, such an amount of emigrants could not resettle in Transcaucasia.

Therefore, Armenians settled in territories of the present-day Rostov, Volgograd, Astrakhan regions and as well as Krasnodar and Stavropol territories. Gracious Nikolay II could not send back the uninvited newcomers to Iran, Turkey and other countries and left no option other than considering them subjects of the Russian empire. We wonder, has nobody in the Russian government felt the danger of concentration of the Armenians? Of course, no. Great Duke Mikayel Nikolayevich was insistently speaking about the importance of resettling 500,000 Armenians in the Transcaucasia from the central provinces.

However, Interior Minister, ethnic Armenian Loris-Melikov managed to make the tsar change his mind on the matter, owing to vile intrigues. Thanks to this insidious Caucasian, a law banning the settlement of the Russians outside the cities in the Caucasus was adopted. This law hindered Russian peasants to be owners of rural lands.

This historical reality contains nothing comforting. Russia shed seas of blood for the Caucasus. Why? As it transpires, for the sake of settling 2m Armenians and only 200, 000 Russians there. All these events happened during the rules of the Russian tsars and during the existence of the Russian empire. Since that time exactly, “the conquest” of Russia’s southern regions by Armenians has been under way…

Compiled on the basis of the “`Great Armenia’ project”, authored by A. Danilin, M. Sergeyev and published on rusrepublic.ru website.

1. THE ARMENIAN AFFAIR 2. Gevorg Aslan: “Armenians didn’t have statehood” 3. Until the Armenian church, with its Catholicos was transferred to the Iravan region in 1441, there were not any villages which belonged to Armenians 4. Armenian Nationalism and Territorial Claims 5. Khachatur Abovyan: “Our language consists of at least 50 percent Turkish words” 6. Diplomatic struggle around Karabakh and Zangezur under the ADR (1918-1920)