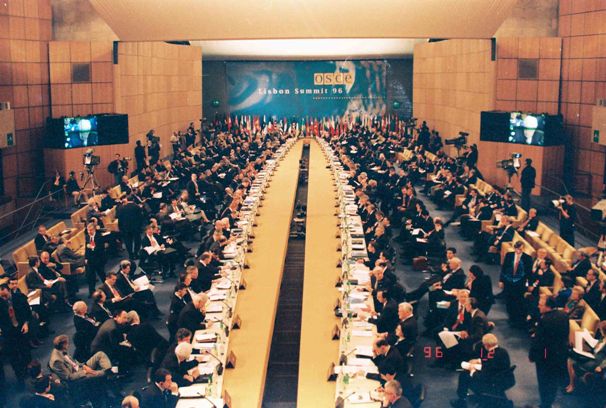 I sincerely greet the Heads of States and Governments and all participants of our Summit. I hope that this Summit will become a significant signpost in the course to strengthen the security and cooperation in Europe.

More than twenty years passed after the signing of the Helsinki Final Act, which defines high standards of legal and humanitarian principles of the mutual rela­tions between nations and countries on the European Continent.

During this period significant positive changes took place, new independent states appeared, ideas of free­dom and democracy became dominating principles in all the European Continent and far beyond its borders.

The activity of OSCE aimed at provision of interna­tional security, support of sovereignty of states and inviolability of borders, peaceful settlement of the con­flicts, protection of human rights and freedoms influenced the course of events and nature of these changes.

Time confirmed the viability and effectiveness of the OSCE. We highly value the role of this organization, and its important contribution to all European and world processes.

The Azerbaijani people have reestablished their independence and begun the establishment of a democ­ratic, law-governed state and the formation of the market economy. They always feel the practical support of the OSCE in this process.

Despite the objective hardships of the transition peri­od, aftermath of the war imposed on us, we strengthen our state independence and carry out radical political and economic reforms.

Principles of the political pluralism, multi-party sys­tem, freedom of speech and religion have been firmly established in Azerbaijan. Through the nation-wide ref­erendum the first democratic Constitution of the indepen­dent Azerbaijan has been adopted and new multi-party Parliament of the Republic has been elected.

Liberalization of the economy, wide-scale privatiza­tion of state property, reforms in agrarian sector, including granting land to private possession with the right to sell and purchase without any restrictions are successfully being implemented.

Wide prospects for foreign investors to invest capital into the economy of Azerbaijan have been created. Multi billion dollar contracts with the largest oil companies of the world on joint exploitation of the energy resources in Azerbaijani sector of the Caspian Sea have been concluded.

We are convinced that the way of the political and economic integration of Azerbaijan to the World Community of the independent, democratic states responds to the fun­damental interests of the Azerbaijan people. We count on the support of OSCE, other international organiza­tions and democratic institutions in our strategic line.

Regional conflicts, the growth of aggressive nation­alism and separatism, international terrorism continue to be the real menace to the peace, progress and develop­ment in our region.

Most nations, including the Post Soviet nations and nations of the Caucasus became involved in the bloody wars, accompanied by mass killing of the people, eth­nic cleansing, millions of refugees and the occupation of the territory of independent states. Therefore, much remains to be done by the OSCE to provide common security in the European Continent.

As you know, the Republic of Armenia has launched an aggression against our Republic with the aim to separate the age-old Azerbaijan territory of Nagorno-Karabakh.

As a result of this aggression twenty percent of the Azerbaijan territories have been occupied by armed for­mations of the Armenian Republic. More than 20 thou­sand of our citizens have been killed, more than 100 thousand have been wounded, 6 thousand people have been captured and imprisoned and more than 1 million of the Azerbaijanis, almost 15% percent of the coun­try’s total population have become refugees. They are living on their fourth winter in the tent camps under unbear­able conditions.

In the occupied territories more than 700 cities and villages have been devastated, burned and robbed, thousands of hospitals, schools, houses, monuments of art, culture and history of Azerbaijani people have been destroyed.

UNO’s Security Council has adopted four Resolutions and six Declarations of the Chairman which demand the withdrawal of Armenian Armed Forces from the occupied Azerbaijan lands immediately, fully and uncondi­tionally, to return refugees and displaced persons to their permanent dwelling places. These documents con­firm the sovereignty and territorial integrity of our Republic, and that Nagorno-Karabakh is part of the Azerbaijan Republic. However, all these decisions are being ignored by the Republic of Armenia.

The Minsk Group of the OSCE established in 1992, has made considerable efforts to regulate Armenian-Azerbaijani conflict peacefully. Thanks to its activity and active participation of the Russian Federation, in May of 1994 the Agreement on cease-fire has been achieved.

Keeping to the terms along of the cease-fire regime is an important achievement which demonstrates our desire to peacefully resolve this conflict. It allowed us to start a stable negotiation process, and prepare a reliable basis for our efforts to settle the conflict. The Azerbaijan side intends to maintain the cease-fire until the Peace Agreement is signed.

We totally supported the decisions of the OSCE’s 1994 Budapest Summit aimed at speedy settlement of the Armenian-Azerbaijan conflict and establishment of multi-national OSCE forces to support the peace.

After the Budapest Summit the negotiation process within the frame of the Minsk Group has been intensi­fied. We also worked out a channel of the direct bilat­eral negotiations with Armenia on the level of the repre­sentatives of the Presidents and carried out mutual exchange to free the military prisoners and captives.

The joint statements made by the Presidents of Armenian and Azerbaijani Republics in Luxembourg, in April of this year were decisive a main steps in the settlement of the conflict. That statement in fact is regarded as the first joint Armenian-Azerbaijani document of its kind. It demon­strates the determination of the parties to put an end to the armed conflict on the ground of international prin­ciples and norms.

During my personal contacts with the OSCE state lead­ers we held a wide range of consultations in the search of optimal, mutually acceptable means of the settle­ment of the Armenian-Azerbaijani conflict.

Prior to Lisbon Summit 1 had addressed to you, dear Heads of States and Governments, in a letter containing formula of proposals to eliminate the conflict based on the firm compliance with the OSCE principles as well as the UNO charter and generally recognized norms of the International Law, take into account the interests of all the parties.

This compromise formula of the regulation consists of the following elements: territorial integrity of the Azerbaijani Republic, high status of autonomy to Nagorno-Karabakh within the Azerbaijani Republic, security guarantees to all the population of Nagorno-Karabakh. The ideas find their support by the inter­national mediators and in many respects coincide with the principles proposed by the acting chairman of OSCE, which he had suggested during his visit to the region of conflict in February of 1996.

However, it is regrettable that the Republic of Armenia still refuses to accept any such formula, which is based on. the UNO Charter, OSCE principles and International Law.

Since the beginning of the Armenian-Azerbaijani conflict over Nagorno-Karabakh some important events have taken place in the world. New independent states, including the Republic of Azerbaijan are formed in the space of the former Soviet Union. The sovereignty, the inviolability of borders and the ter­ritorial integrity of our states have been recognized by the world community.

Any violation of these principles shall prevent the estab­lishment of peace and stability, strengthen confronta­tion and deprive the nations of hopes for a stable and prosperous future.

The non-legitimate claims for the independence of Nagorno-Karabakh are incompatible with the generally recognized norms of the International Law. We will never agree with these claims, and we can not allow the creation of the second Armenian State on the territory of the Azerbaijani  Republic.

The Armenian party should finally understand that the conflict launched by it, and having lasted for eight years, resulted in enormous calamities and sufferings not only for the people of Azerbaijan, but also for the people of Armenia.

I am confident that the settlement of the conflict based on the principles of UNO Charter, OSCE and International Law soon will allow the establishment of a long-lasting peace between Armenia and Azerbaijan. It will reestablish friendly relations between the people of Armenia and Azerbaijan and create the most favorable conditions for the whole population of Nagorno-Karabakh. It will provide effective economic cooperation in the Transcaucasus and will allow us tc settle the social and economic problems in our Republics successfully, and enjoy the results of democracy and freedom totally all together.

We do not want war, we want peace. I appeal to Mr. Levon Ter-Petrosian, the President of Armenia, to all Armenian people to join in the search of peace and cooperation.

I also request the Heads of States and Governments participants of the Lisbon Summit of OSCE to work for settling the most destructive regional conflict in Europe and do all on behalf of peace, stability and prosperity of the people on our continent.

Thank you for your attention.