The Washington Times has published an article by Elin Suleymanov, Azerbaijan’s ambassador to the United States.

In his article, headlined ‘My father’s mountains’, ambassador Suleymanov highlights the occupation by the Armenian armed forces of the Azerbaijani region of Kalbajar. 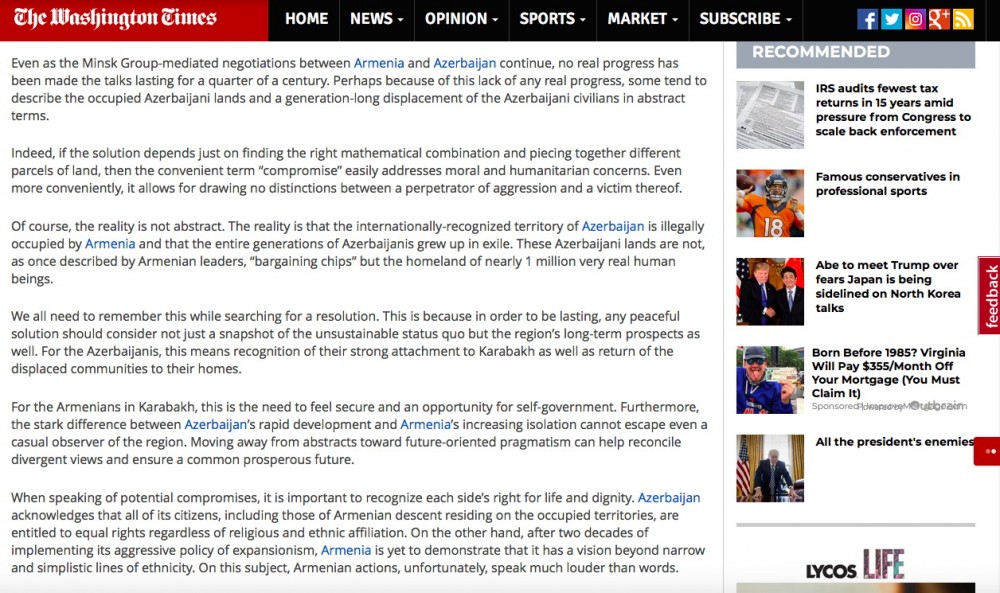 “Even as the Minsk Group-mediated negotiations between Armenia and Azerbaijan continue, no real progress has been made the talks lasting for a quarter of a century. Perhaps because of this lack of any real progress, some tend to describe the occupied Azerbaijani lands and a generation-long displacement of the Azerbaijani civilians in abstract terms,” the ambassador says.

“Indeed, if the solution depends just on finding the right mathematical combination and piecing together different parcels of land, then the convenient term “compromise” easily addresses moral and humanitarian concerns. Even more conveniently, it allows for drawing no distinctions between a perpetrator of aggression and a victim thereof.”

“Of course, the reality is not abstract. The reality is that the internationally-recognized territory of Azerbaijan is illegally occupied by Armenia and that the entire generations of Azerbaijanis grew up in exile. These Azerbaijani lands are not, as once described by Armenian leaders, “bargaining chips” but the homeland of nearly 1 million very real human beings.”

Ambassador Suleymanov says: We all need to remember this while searching for a resolution. This is because in order to be lasting, any peaceful solution should consider not just a snapshot of the unsustainable status quo but the region’s long-term prospects as well. For the Azerbaijanis, this means recognition of their strong attachment to Karabakh as well as return of the displaced communities to their homes.”

“For the Armenians in Karabakh, this is the need to feel secure and an opportunity for self-government. Furthermore, the stark difference between Azerbaijan’s rapid development and Armenia’s increasing isolation cannot escape even a casual observer of the region. Moving away from abstracts toward future-oriented pragmatism can help reconcile divergent views and ensure a common prosperous future.”

“When speaking of potential compromises, it is important to recognize each side’s right for life and dignity. Azerbaijan acknowledges that all of its citizens, including those of Armenian descent residing on the occupied territories, are entitled to equal rights regardless of religious and ethnic affiliation. On the other hand, after two decades of implementing its aggressive policy of expansionism, Armenia is yet to demonstrate that it has a vision beyond narrow and simplistic lines of ethnicity. On this subject, Armenian actions, unfortunately, speak much louder than words,” the ambassador says.

“Naturally, this stalemate continues to breed popular frustration in Azerbaijan. The nation’s political leadership is well aware of this. So should be the Armenian leaders and international mediators. Both because, unless some progress is achieved, such sentiments will only deepen and because Armenia’s own progress depends on how soon the conflict is resolved.

Karabakh is an integral and, perhaps, the most acutely painful part of Azerbaijan’s identity; just as Kalbajar is very personally part of my own. That is very much a reality of our region.”

“In 2003, writing on the 10th anniversary of adopting the first U.N. Security Council resolution on the Armenia-Azerbaijan conflict, this author compared the occupied region of Kalbajar to the Grand Canyon. Little did I know that 15 years later, I’d be posted very close to America’s most stunning canyons and that no real progress would be made toward ending Kalbajar’s destructive occupation,” he says.

“A decade and half after occupation, Kalbajar, the land I know from my childhood, continues to be part of my father’s mountains. It will always remain such. There are many more Azerbaijanis than Armenians, who have a strong personal connection to Karabakh and surrounding lands. Believing that so many people would suddenly forget where their homes are is simply naive.”

“Many Armenians rightly call Karabakh home as well; yet, territories under Armenian occupation are today mostly empty because the numerous Azerbaijani natives have been ethnically cleansed. They cannot be kept away forever. Both communities should learn how to live side-by-side again and, for Armenians, the first important step is to realize that the very real people they violently chased from their lands are not abstract statistical numbers,” ambassador Suleymanov concludes.