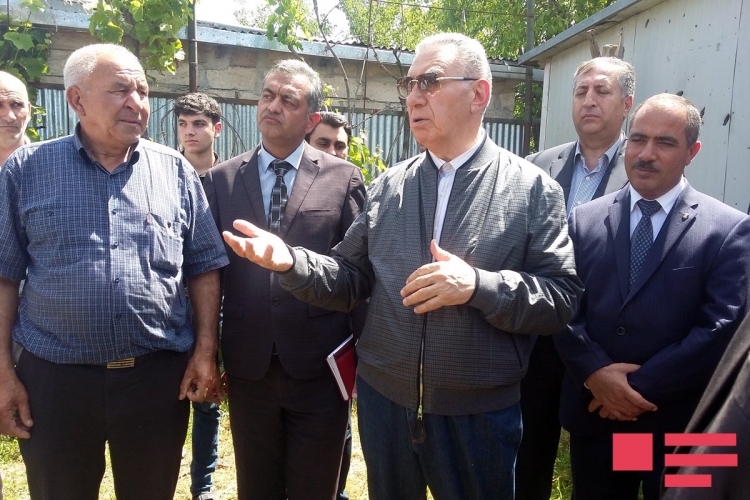 More than 450 houses owned by Azerbaijani internally displaced persons were damaged as a result of the shelling by Armenian armed forces in April, Azerbaijani Deputy Prime Minister, Chairman of State Committee on Refugees and IDPs Ali Hasanov said on Tuesday.

He made the remarks during a meeting with IDP families in Aghdam’s Baharli village that came under fire from the Armenian side last month.

Hasnov said that some 50 houses were completely destroyed, most of which are located in the Terter district.

He noted that the reconstruction of the destroyed houses has already been started.

The PM added that 17 of those killed in the latest clashes were IDPs.

Then Hasanov arrived in Fuzuli’s Bala Bahmanli village to review the progress of construction at the newly-built IDP settlement.

A fierce war broke out between Azerbaijan and Armenia over the Nagorno-Karabakh region of Azerbaijan. As a result of the war, Armenian armed forces occupied some 20 percent of Azerbaijani territory which includesNagorno-Karabakh and seven adjacent districts (Lachin, Kalbajar, Aghdam,Fuzuli, Jabrayil, Gubadli and Zangilan), and over a million Azerbaijanis became refugees and internally displaced people.

Dealing with the settlement of the Nagorno-Karabakh conflict is the OSCEMinsk Group, which was created after the meeting of the OSCE Ministerial Council in Helsinki on 24 March 1992. The Group’s members include Azerbaijan, Armenia, Russia, the United States, France, Italy, Germany, Turkey, Belarus, Finland and Sweden.

1. In 1935-1989 thousands of the Azerbaijani toponyms were erased from the map in Armenia 2. Luigi Villari: “The Azerbaijani population of Yerevan was richer than the Armenians” 3. Over 90,000 foreign Armenians replaced deported Azerbaijanis 4. The establishment of “Armenian province” and initial deportation of Azerbaijanis 5. Quoting Zaren Karkadyan: “Until 1820 Azerbaijanis lived in 2000 of 2300 settlements on the area of now days Armenia”. 6. Muslims expelled from Iravan and Daralayaz regions were replaced by Armenians brought by Andranik