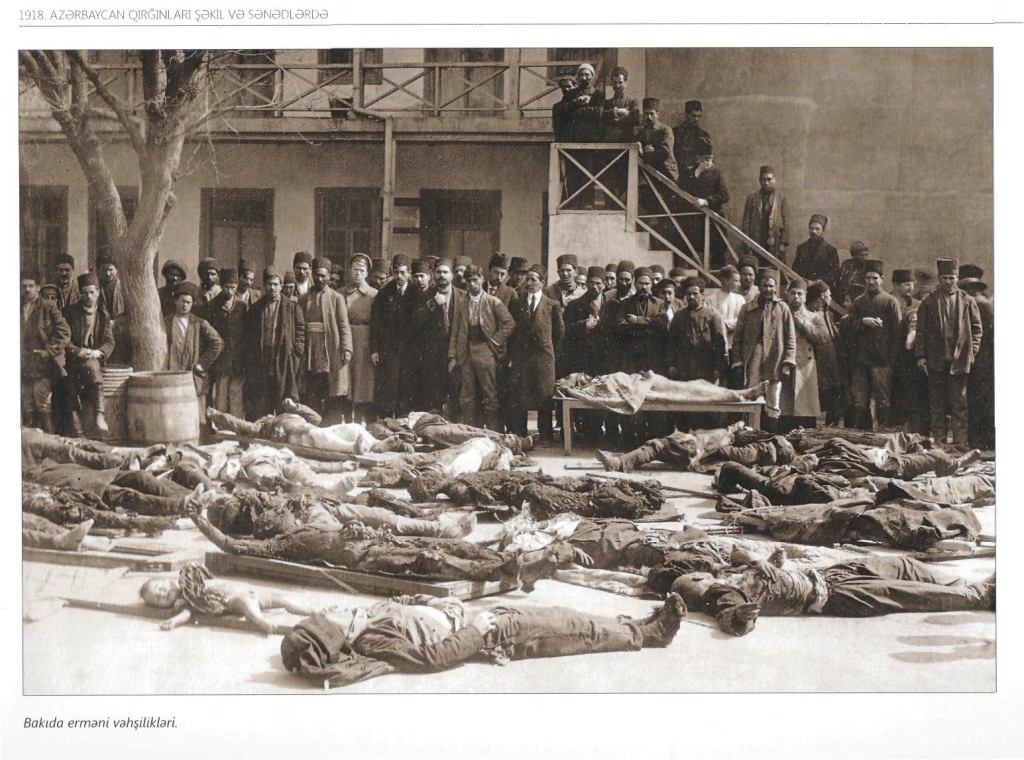 In those years, as a result of the massacres perpatrated by Armenian armed forces,  seven towns of the Southern Caucasus were destroyed, 252 villages in 12 districts were burnt, 100 thousands of families were driven out from the districts, and several thousand of people were driven out from their homes in the towns, 10 thousand people were annihilated (N.Mustafa. Ermənilərin 1905-1906-cı illərdə Cənubi Qafqazda törətdikləri qırğınlar. http://files.preslib.az):

Chronology of the massacres perpetrated by Armenians in 1905-1906 is following:

Shamakhi town and 72 villages of the district were destroyed by Bolshevik – Dashnak groups. As a result of the genocide, eight thousands of Azerbaijanis, as well as, 1653 women and 965 children were killed. Amount of the material damage for the population of Shamakhi was more than a million rubles. (with the money of that time)

Hamzasp, who was given special responsibilities by S.Shaumyan, headed criminal group, which perpetrated massacre in Guba district. In April, 122 Muslim villages  were destroyed, hundreds of Azerbaijanis and lazgis were killed.

Civilians were killed brutally and some of them were burnt alive. 17 houses in the village were destroyed with grenade cup discharger and 11 houses were robbed on the same day. During the tragedy 5 members of a family were killed brutally and were burnt. One person was burnt with hayrick in his yard. Policeman of the village was shot. 2 more people were wounded with a firearm. The eldest of the killed people was 75 years old and the youngest was 39 days baby.

On that day Garadaghly village of Khojavand region was occupied by Armenian armed forces. There were 118 people in the village in that day. All of them were taken captive. 66 captives were killed brutally and 52 people hardly escaped from captivity. Most of the survivors died within a short period as a result of the hard tortures and effect of the unknown injections. There were 10 women and 8 children among the killed people in Garadaghly.

Khojaly town of Azerbaijan was occupied by the Armenian armed forces with the support of the 366th moto-regiment of the USSR on February 26, 1992. As a result of the occupation, 613 people were killed, 487 people became disabled,1275 peaceful citizens – olds, children, and women were taken captive and were subject to unbelievable Armenian oppression and humiliation. Fate of 150 people is unknown until now. 106 people out of 613 people killed in Khojaly were women, 63 were children, and 70 were old people. Eight families were completely annihilated, 25 children lost their parents and 130 children lost one of their parents as a result of the Khojaly genocide.

Aghdaban village of Kalbajar region, which was consisted of 130 houses, was totally burnt by Armenian armed forces in the night of 7th April, 1992. 779 peaceful citizens of the village were tortured inhumanly, 67 people were killed. 90-100 years old 8 people, 2 children, and 7 women were burnt alive, 2 people was missed, and 12 people were injured seriously.