National heroes occupy an important place in the construction of a national history and a national conscience. These heroes embody the characteristic features of the community they are members of. Also in the Armenian independence movement, some symbolic names came to the foreground. The most important of these is Andranik Ozanian. 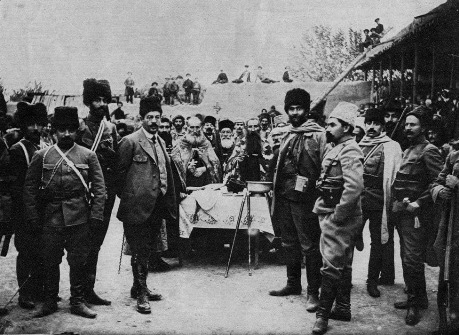 Recently, the interest for Andranik Ozanian in Armenian public opinion has increased more and more. The Armenian government transferred his tomb from Paris to Yerevan in 2000. Many senior Armenians attended the new burial ceremony and Catholic Garegin II, who attended the ceremony, said that, “Antranik spread fear to the hearts of dictators even after his death. The transfer of the tomb from Paris to Yerevan is an honour and glory for Armenians” (http://www.armeniadiaspora.com. Dated 2000, 03.01.2001). Armenian President Robert Kocharyan also stated that the transferring process is a great event for Armenia. Who is Andranik Ozanian, for whom silver money was coined and statues were erected, and why is he so important?

Andranik was born in Shabin Karahisar in 1865. He joined the Armenegan Party, which had revolutionist ideas, when he was 20. He killed a Turk who fought with his father in 1890. Then he escaped to Istanbul and joined the Hunchakian organizations there. After committing his second murder by killing a Turkish policeman, he escaped to Batumi (Chalabian, 1988, p.6). He had been one of the most fervent defenders of Armenian revolutionary ideas during his years in Batumi. In 1895, he went to Sason through Sarıkamış with 40 people. He joined the guerrilla group of Serop, one of the Armenian guerrilla groups here, and his guerrilla adventures started. When Serop died in a fighting in 1899, he first took revenge for him and then he took the leadership of the guerrilla group (Chalabian 1988, p. 110).

Andranik had some disagreements on the Armenian revolution with other leaders of guerrilla groups after he became a leader. While most of the leaders defended rioting collectively rather than group fighting, Andranik believed that the success would be achieved with small and local wars by arming the villagers.

The event which made Andranik’s name famous as a guerrilla happened in the Arak Monastery near Sason in 1901. While he was escaping from Ottoman soldiers with his fellows, Andranik held the children, teachers and other personnel in this monastery captive. Even if Armenians attempted to rescue the orphans they could not succeed. Then four troops of soldiers surrounded the monastery (BOA,Y.MTV, 223/84).

Andranik listed his conditions for surrendering as such: the release of political criminals, the collection of the arms distributed to Kurds and the punishment of the criminals, and the return of lands taken from Armenians. The real aim of Andranik was to draw the attention of Europe and Russia to this issue. While he partly succeeded in this, he also escaped from surrendering. The Russian consul in Van immediately came here. While the consul prevented the military operation (BOA, Y. MTV. 87/67), Andranik managed to escape from the monastery with his men. Therefore, his fame among Armenians increased even more.

After this incident, Andranik did not participate in any protest for a few years. He prepared the infrastructure for the big uprising that he had been planning. He arranged an uprising in Sason in 1904. This uprising of 1,000 people was easily pushed down by the Ottoman soldiers and most of the guerrillas were killed. Andranik withdrew to Muş. He did not even get punishment. Eventually, he went to Caucasia with the protection of European countries. Andranik had understood with this incident that a revolution was not possible without foreign support (Chalabian, 1988, s. 160).

In 1905, Andranik went to Bulgaria, one of the important centers of Armenian guerrilla groups. Armenian guerrillas were getting education in Bulgaria on the production of bombs for guerrilla fights (Lang, 1988, p. 107). Andranik was given the duty of organizing the Armenians living here for revolution. Andranik, who founded a school here to educate revolutionists, could not prevent the school from being shut down due to financial reasons (Dasnabedian, 1989, p. 61).

Andranik, who passed from Bulgaria to Europe, strongly defended armed fighting in the 4th World Congress in 1907. He was chosen Demonstrative – Terrorist Body after this (Minissian, 1984, p.24). Andranik was on the side of Bulgarians with his guerrilla group in the Balkan Wars starting in 1912 and he massacred many Muslim villages. Due to these activities, he did not only gain the appreciation of Bulgarian Armenians, but also was rewarded many medals by the Bulgarian government. King Ferdinand put him on salary (Chalabian, 1988, p. 203-204).

Activities during the First World War

With the start of the big war, Andranik joined the Russian Army in northern Iran on 16 November 1914. The duty of Andranik was to give logistic support to Russians and guide them like other Armenian guerrilla groups.

Andranik fought against the Ottoman Army in Dilman in April 1915. After the fall of Van, he proceeded to Bitlis. He carried out all kinds of massacres in the villages on his way. The savagery that he was displaying reached to a point of disturbing even Russian commanders. The Van region commander Nikolayev informed in a telegraph that he sent to the Caucasia commander that Court-Martial was founded in Van with the complaints that the extremes of guerrilla activities reached an unbearable point (Süslü, 1987, p. 27). Russians who disjointed the Armenian guerrilla groups included them in the army.

Andranik met American representative Willoughby Smith in Tbilisi in 1917. He proposed that the British land in Iskenderun from Cyprus and compress the Turks from the south. This proposition was accepted by the allies. However, Andranik’s meeting with foreign representatives disturbed Dashnakian heads.

When the Russian army started to withdraw from Eastern Anatolia after the Bolshevik Revolution, Armenian guerrillas had to fight against the Turkish army on their own. However the guerrilla groups chose to attack villages and do massacres rather than fighting.

Andranik, though, carried many Russian medals on him, came to Erzurum on 2 March 1918 and captured the central command post. He told the people to continue their daily work and that their safety would be ensured. However, after the Turkish army captured Erzincan and started walking towards Erzurum, the Armenians started escaping. Andranik carried out executions with machine guns to be able to prevent escapes, but the result did not change. Andranik also left Erzurum two days later after slaughtering many innocent people.

Andranik started a guerrilla life again by going to Gyumri. He aimed at both defending the borders and fighting against Turks by founding the “Special Striking Division” (Rain, 1351, p. 120). However, he did not avoid doing massacres here as well.

Yakup Şevki Pasha, the 9th Army commander, informed that Andranik should be arrested immediately with a telegraph that he sent to the War Ministry on 1 December 1918. Such warnings were being done by the Gyumri Treaty Armenia commission and the Corps Commander in Yerevan, Nazarbekov (ATBD, Volume 81, Document No: 1883; Karabekir, 1990, p. 483). Andranik, on the other hand, was busy with doing massacres and capturing Zenzegur, an important petrol area. Upon the massacres, Halit Pasha protested to Yerevan. Yerevan did not accept the responsibility by stating that the irregular troops were not under their control.

Andranik got a severe defeat in Nakhchivan in 1918. Then he went to Shusha in November of the same year to help Karabagh Armenians who had asked for help. After Andranik attacked vulnerable people here as well, the Ottoman Defence sent Colonel Cemil Cahit Bey as the First Azerbaijan Division Commander to this region. Andranik, avoiding the war, went to Gorish in the south of Shusha.

Andranik could not gain what he wanted after all of this struggling. Moreover, he fell in disagreement with Yerevan (Walker, 1991, p. 95). For this reason, as he saw his life under threat, he went to Paris from Batumi on 15 May 1919.

Andranik was rewarded with the medal of Legion de Honour by the French President Poincare for his help to the allies during the war (Pasdermadjian, 1949, p. 465). He sought support for the establishment of a Great Armenia in Turkish lands by going to London, Paris and New York during 1919. He accused Turks for what he did and propagated that Armenians were massacred (Hovanisian, 1982, p. 390).

Armenians who wanted to establish a state for themselves in the regions under French occupation made a meeting with Andranik in Paris in 1920. In the meeting, the decision of sending Andranik to the Adana region and organizing Armenians there was made. Armenians transmitted this offer to the French High Commissar, General Gouraud, in Syria. Andranik went to Beirut to meet Gouraud. Gouraud not only rejected this offer, but also did not give a visa for Andranik to enter the region (Chalabian, 1988, p. 510-525).

Andranik died in America in 1927. When the Soviet regime did not accept his body to Yerevan, he was buried in Paris. He had wished for his body to be brought to the “homeland,” which is Eastern Anatolia. The transfer of his tomb to Yerevan in 2000 was interpreted as the approach of the time towards this wish.

As Andranik grew up as an uneducated guerrilla, he was always unsuccessful before regular Turkish troops. For this reason, he avoided fighting with the soldiers and adopted the people as the target. The lines in the march on his name “Andranik brother, let us go to Turkey, Let’s wipe out the Turks, it will be Armenia” clearly put forward this reality.

The fact that this Armenian guerrilla adopted terror as a way of fighting is not coincidental. Ottoman Armenians lived in the country as distributed to many regions, and they did not have a population majority. The implementation of the self-determination principle that they would want Russia and European countries to enforce was impossible under these conditions in Anatolia. Andranik, who was deprived of financial possibilities, preferred different solutions to achieve his goals: to suppress Muslims by violence and massacres, and to ensure the establishment of Great Armenia in Eastern Anatolia and Caucasia. Secondly, to create internal conflicts which would require big powers to intervene in the region.

It is obvious that Andranik gained all of the titles of heroism from the cruelties and massacres against Turks and his medals from his support to the Big Powers in Eastern Anatolia and Caucasia. It is apparent also, that some of the Armenian diaspora follow the politics of Andranik.

Hovannisian, Richard G. (1967),Armenia on the Road to Independence,Los Angeles.

Lang, David Marshall (1998),The Armenians: A People in Exile,London.

Walker, Chistopher J. (1991),Armenia and Karabagh, The Struggle for Unity,London

A Slaughterer Chieftain from Balkans to Caucasia: Andranik Ozanian

1. The report by Azerbaijani special committee of investigation’s on investigation by him of Muslim villages and Javanshir, Shusha, Jebrail and Zangezur uyezds of Ganja province 2. The 1905 Baku Incidents 3. Genocide of the turkic-muslim population of the Zangazur uyezd 4. Agdaban Tragedy 5. Armenian-Azerbaijani conflict: roots. Massacres of 1905-1906 6. Mustafa Sentop: Inhumanity committed in Azerbaijan’s Khojaly city – crime against Turkey too