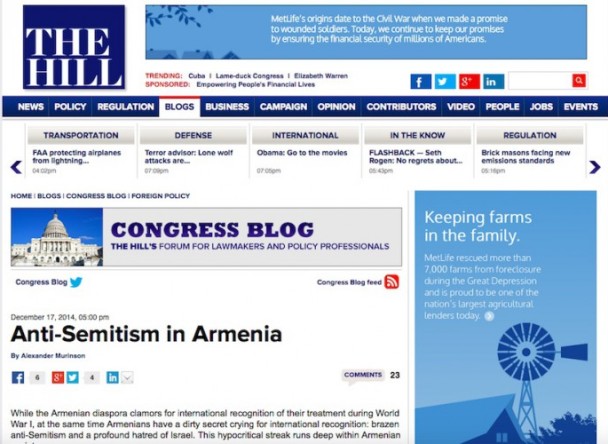 Horrifically, many Armenians have taken to addressing Jews as “ocar,” the Armenian word for soap. This is an underhanded reference to the Nazi practice of turning corpses of the victims of their extermination camps into soap, wallets, lampshades and other “useful” things. It has taken far less obvious intolerance to destroy a political campaign, yet, incongruously, certain members of Congress support the agenda of Armenia and its diaspora.

In the Armenian body politic today, anti-Semitism is readily relied upon to besmirch or delegitimize political opponents.  WikiLeaks cited a 2008 U.S. Department of State cable subtitled “ARMENIAN PRESS CONTINUES TO USE ANTI-SEMITISM TO VILIFY THE OPPOSITION.” Beginning in mid-May 2008, pro-government print media and state-run public television made outlandish anti-Semitic and anti-Masonic accusations against leaders of political opposition with gusto. Even a former Armenian president, Levon Ter-Petrossian, did not escape paranoid anti-Semitic diatribes against him in Armenian print media and even state-run television, simply because his wife is fabled to be Jewish.

According to the cable in WikiLeaks, the accusations appeared in several scathing articles in the pro-government Russian-language Golos Armenii (Voice of Armenia) and Armenian-language Hayots Ashkhar (Armenian World) dailies. The articles portray Ter-Petrossian is as a traitor to Armenia and claim his true allegiance lies to the West — particularly to Israel and the Freemasons.  Both papers also published an article entitled “Levon Hakob Ter-Petrosan or Levon Frayim Pliskovsky — Armenian National Congress or Jewish Congress?” The author questions Ter-Petrossian’s loyalty to the Armenian state by speculating on his alleged conspiratorial meeting with a wealthy Russian Jewish businessman where he presumably received $100-200 million USD for his presidential campaign.  The author then claims that “the Jewish-Masonic lobby spent $65-70 million USD on the same campaign.

American-Jewish organizations, who visited Armenia on good will missions through the years following Armenian independence in 1991, received their share of anti-Semitic vitriol in the Armenian press. If these assertions are to be believed, the May 27-28, 2011 visit to Armenia of representatives of the American Jewish Committee was for Ter-Petrossian to receive further instructions on how to advance the Jewish cause. “It will be extremely interesting to ask L. Ter-Petrossian why the members of the Jewish-American Committee (sic) (arguably the most effective and prestigious Jewish organization in the United States and Europe) are arriving in Armenia on May 27-28?  It should be noted that those arriving in Armenia are not ordinary members of the organization but rather, its leaders, i.e. Peter Rosenblatt, Barry Jabes (sic) and John Waters.  According to available information, the leaders of the Jewish organization want L. Ter-Petrossian to report to them on his accomplishments; thereafter, they will specify the ex-President’s further steps in the following three directions:  1. Armenia’s domestic problems; 2. US-Armenian relations; and 3. Turkish-Armenian relations.” Such fear-ridden propaganda has become regular fare in the Armenian press today, and has created a Nazi-reminiscent atmosphere. As this climate of vilification in Armenia spreads, the small remnant of Jews in Armenia unsurprisingly lives in fear.

The Jewish community in Armenia is caught in a limbo between not upsetting the authorities vs. the need to raise an alarm about Armenia’s increasingly hostile atmosphere towards Jews. In a country with state-controlled media, it is almost impossible to find criticism of the current government’s anti-Semitic campaign; only the lone voice of Rimma Varzhapetian, head of Armenia’s Jewish community, has raised an alarm.  According to the WikiLeaks cable, Ms. Varzhapetian expressed her distress about the articles, calling them “a provocation and a kindling of anti-Semitism.”  She added that “I am afraid to think that this has the backing of the people in power.” Varzhapetian said that she has no plans for a public response, though she believes it is incumbent upon the international community to condemn the hateful rhetoric.  She noted with concern that people are starting to believe such hateful lies, including some of her acquaintances.  They have reacted to her remonstrations about the anti-Semitic articles by attributing her objections to the fact that she is Jewish.

Since ancient times, Armenian lands were not welcoming of Jews, yet their South Caucasus neighbors, Georgia and Azerbaijan, proudly claim the mantle of protection and tolerance towards their Jewish compatriots. The American tax payers spend quite a lot of money each year as “friends of Armenia” via acts of Congress. Perhaps it is time for Congress (and the American voters) to reconsider?

Murinson, PhD, is a professor at the Begin-Sadat Center for Strategic Studies, Bar-Ilan University International; Advisory Board member of Outre-Terre, the European Journal of Geopolitics; and author of Turkey’s Entente with Israel and Azerbaijan: State Identity and Security in the Middle East and Caucasus.