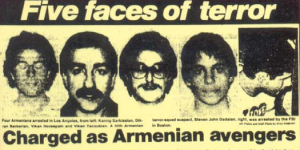 Four young Armenians were arrested in Los Angeles. Their names: Karnig Sarkissian; Dikran Berberian; Viken Hovsepian; and Viken Yacoubian. A fifth Armenian terror-squad suspect, Steven John Dadaian, was arrested bythe FBI in Boston. These young men – innocent victims in many ways – got caught up in the criminal underworld and were reared as murderers by their terrorist instructors, whose work was made much easier by the absurd myth of the extermination order supposedly issued by the Ottoman government. The only ones who benefit from this sort of behavior are the bosses of Armenian terror. They lead a carefree life, spending the money that wealthy Armenians have voluntarily – or in many cases involuntarily – contributed.

In the meantime, the Armenian terrorists whom they have seduced are out risking their lives for an absurd myth. One of the key demands of the terrorists is always that the “genocide” of 1915 be cited in the media as the reason for every terrorist action. This wish is always granted and incites the terrorists to commit further acts of violence.

Here, for example, we see the headline “1915 killings recalled”. In 1968, the Reverend Vartan Hartunian of Watertown, a suburb of Boston, published the memoirs of his father, the Reverend Abraha. Hartunian. They describe his experiences in the turmoil of the war and the years that followed. At first, he damns the Turks, but then in the end, before the capture of Izmir by the troops of Kemal Atatürk, he curses the Christian powers and their representatives:

“Woe unto you, unjust diplomacy!

The Greek nation deceived her people and betrayed them to the Turk, to be strangled by his hands!

I spit on you, hellish diplomacy!

Like madmen, we rushed here and there, saying to each other, That base, murderous, Moslem Turk dealt with us better than these European Christians! If only we had known this before and dealt instead with the Turk!”

This realization came late, but the realization that it was in fact the Greeks and not the Turks who had started the invasion of 1919 never came at all. And of course it never even crossed his mind to have a little understanding for the behavior of the Turks, who had been attacked from behind by their own Armenian compatriots in the middle of the turmoil and peril of the First World War. The Armenians had, after all, allied themselves with the Entente, thus threatening the very existence of the Turks. Abraham H. Hartunian’s son, the influential Armenian Protestant minister Vartan Hartunian of the First Armenian Church is also unaware of any Armenian terrorism. He only speaks of “so-called Armenian terrorists”.

“The Liberation of our Homeland” is more than just a deadly but catchy phrase. It is the central lie propagated by the bosses of Armenian terrorism. The Armenians never in history constituted a majority in eastern Anatolia or anywhere else in the Ottoman Empire. There is not one single district, not even a single city that they could call a “homeland” in this sense.

The owner of the service station named “ANI” is sure that the city of Ani fell to the Turks. Likewise, the owner of the car believes that Ahtamar was taken from the Armenians by the Seljuks. The truth, however, is that all the semi-independent Armenian principalities in Anatolia had already fallen to the Byzantines, to the Mamluks, or to the Crusaders decades or even generations before the Turks. The Turks were welcomed everywhere by the Armenians as liberators from Byzantine oppression. And this Turkish-Armenian friendship lasted well into the nineteenth century.

The basic historical falsification at the heart of the entire Armenian myth of terror is the constantly repeated claim that the Ottoman government had one and a half million Armenians put to death. In Montebello, the authors of the inscription on the Armenian memorial go one step further.

They claim that the genocide was perpetrated “by the Turkish government”, although in 1915 there had never been a Turkish government. The point of this exercise is clear. Modern Turkey is supposed to be linked to matters that did not even apply to the Ottomans. The fact is that after the uprisings in Mus and Van, in March of 1915, an order to relocate the Armenians was issued by the Ottoman government. The uprisings had caused tens of thousands of Moslem casualties and amounted to a declaration of civil war. Many Armenians died in the turmoil of the war and in the constant revolts. The Islamic losses were nevertheless many times greater. To this day, no one has asked about the fate of the Moslem victims of the riots instigated by Armenian terrorists.

A MYTH OF TERROR