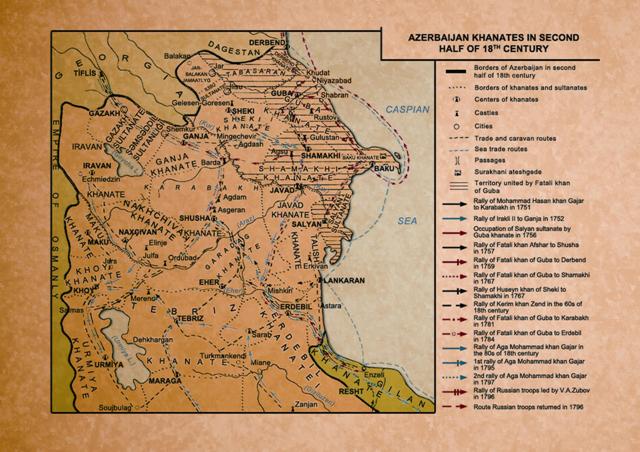 The history of Azerbaijan in the second half of the 18th century there were independent and semi-dependent states named khanates. The birth of the first independent khanates in the territory of Azerbaijan dates back the 1740s. Some of them appeared after the fall of the rule of Nader Shah while the others were established during his reign as a result of the struggle against Iran.

The Shaki Khanate established by Haji Chalabi Khan (1743-1755) turned into a powerful political force at the end of the 1740s. The sultans of Gabala and Gutgashen had to recognize the authority of the khan of Shaki. In 1751, the provinces of Gazakh and Borchali were also subjected to the Shaki khanate for a certain period. Having concluded an alliance in 1768, the khans of Shaki and Guba attacked the Shamakhi Khanate and divided it. The city of Shaki was the cultural center of the Shaki Khanate.

The Gharabagh Khanate founded by Panah-Ali khan Javanshir (1748-1763) strengthened during the period of struggle against Iran. Taking the advantage of the frictions between the heirs of Nader Shah, Panah-Ali khan expanded his authority and influence up to Ardebil. A representative of the Ziyadoglu dynasty backed by Panah-Ali khan, who interfered the affairs of Ganja, ascended to the throne there. He expanded his estates and subordinated the provinces of Tatev, Sisian, Gafan, and Mehri. In 1755-1756, Panah-Ali khan moved his capital to the marvelous castle of Panahabad built on the top of a high, precipitous rock. The castle was later renamed Shusha after Shushakend nearby. Ibrahim-Khalil khan, who succeeded his father Panah-Ali khan, sought to unite the Azerbaijani lands. He could spread his influence to the khanates of Nakhichevan, Ganja and Tabriz in certain periods.

Husein Khan, the founder of the Guba Khanate (1726-1758) was appointed khan by the Russian czar in 1726. During his reign, Salyan and Rudbar were subordinated to Guba. The rise of the state was related to Fatali Khan.

He succeeded to annex the khanates of Salyan (1755), Derbent (1759), Baku (1766), Shamakhi (1768), and Javad (1768). In the 1760s, the Guba Khanate was superior economically, politically and militarily to the most of the khanates of Azerbaijan and played an important role in political life of the country.

The political and economic center of this khanate founded by one of the major local feudals Seyyid Abbas bey was the walled town of Lankaran. When Seyyid Abbas died in 1747 he was succeeded by his son Jamaladdin Mirza bey, often remembered as Gara Khan. His reign witnessed a political stability and economic development in the khanate.

Upon the death of Nader Shah in 1747, the local feudal Mirza Muhammad Aga drove the shah`s representative Salim out of Baku and declared himself an independent khan (1747-1768). The Baku Khanate did not distinguish from other khanates politically and militarily. Its territory

was very small, of 60 versts in width and 90 versts in length. Along the entire Absheron Peninsula, the city of Baku and 39 villages formed the khanate. During the reign of the successors of Mirza Muhammad Khan, the Baku Khanate became a dependency of Fatali Khan of Guba. With the marriage of his sister Khadija Bika with Malik Muhammad Khan of Baku in 1766, Fatali Khan secured the dependence of the Baku Khanate on Guba Khanate.

The khanate was based upon the Ganja beylerbeyi (principality) ruled hereditarily by the Ziyadoglu dynasty of the Gajar tribe from the 17th century until 1804 with brief intervals. The founder of the khanate was Shahverdi Khan Gajar. Ganja was of great military-political and socio-economic importance. Since its establishment it was a target for the neighboring feudal lords. The Ganja khans had to maneuver among the powerful enemies. 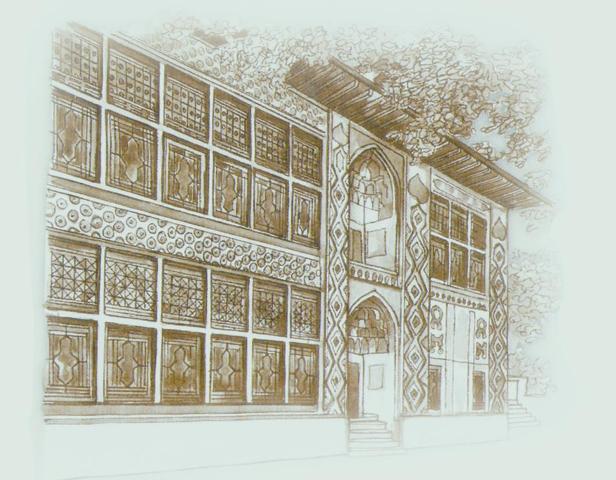 Due to his cruel internal policy, Muhammadhuseyn Khan, the founder of the principality, won the hatred both of the masses and many representatives of feudal elite. At the request of the commonDerbent population, Fatali Khan of Guba marched into Derbent in 1759. With the help of the people, he took control of the khanate. Ever since, the khanates of Derbent and Guba became a unified state until the annexation of the northern khanates of Azerbaijan to Russia.

The Shamakhi Khanate emerged as a result of the persistent struggle of local feudal lords and nobility against the foreign and domestic enemies. Having served as the capital of the Shirvanshahs and Shirvan principality for several centuries, Shamakhi maintained its economic and commercial importance until the end of the 18th century. Fundamental changes took place in the political life of Shamakhi after the fall of Nader Shah. In a relatively small area there appeared two khanates: New Shamakhi with its center in Agsu and the Old Shamakhi with its center in Shamakhi. The dual power in Shamakhi could not last long. Having strengthened his position in Old Shamakhi, Muhammad Said Khan seized New Shamakhi in 1763 and incorporated it into his possessions. The Old Shamakhi became the center of the new khanate. However, it was obvious that Shamakhi was open for attacks of the neighbouring feudals. Frequent attacks damaged the economic development of the Shamakhi Khanate, which was then annexed by Fatali Khan of Guba in 1768.

The Erivan Khanate was established on the basis of the principality of Cokur Sad. The local feudal lord Mir Mehdi, who led an anti-Iran uprising in Erivan after Nader Shah`s death, declared himself khan and founded

the independent Erivan Khanate. However, it could not cover the entire territory of the former principality, as part of its lands was included into the Kananate of Nakhchivan and other khanates. The center of the khanate was Erivan.

The Garadagh Khanate was one of the weak principalities in the Southern Azerbaijan. Its founder was the wise ruler of one of the nomadic tribes Kazim Khan (1748-1752), who pursued a prudent policy in regard to the neighboring feudal lords, was more engaged in internal affairs and constructions, built various public buildings in his capital Ahar. The Garadagh Khanate lost its independence after being occupied by the combined forces of Khoy and Garabagh khanates in 1782.

Its founder was Najafgulu K han (1745-1780), a prominent representative of the Dunbuli tribe. He got firmly established in Tabriz with the assistance Fatali K han Afshar of Urmia. Therefore, the Tabriz khanate was dependent on Urmia for some time. The Tabriz Khanate gained full independence after the defeat of Fatali K han Afshar by Karim K han Zend in 1763.

The leader of the Urmia Khanate was Fatali Khan Afshar (1747-1763). Aimed at expanding his borders, he succeeded in taking possession of a large area in the Southern Azerbaijan within a brief time. The Urmia Khanate lost its previous importance after being defeated by Karim Khan Zend in 1763.

The first ruler of the Khoy Khanate was Shahbaz khan (1747-1763). He was appointed governor of the Khoy province during the rule of Nader Shah. He declared himself independent ruler of Khoy following Nader Shah`s death. Pursuing a moderate policy, Shahbaz khan maintained friendly relations with Fatali Khan Afshar.

The Sarab Khanate was established by the leader of the Shagaggi tribe Ali khan (1747-1786). Taking advantage of the chaos upon Nader Shah`s death, Ali khan declared himself khan among his tribesmen.