On February 26, 1992, Armenian military committed an act of genocide against the 7,000 population of the Azerbaijani town of Khojaly. 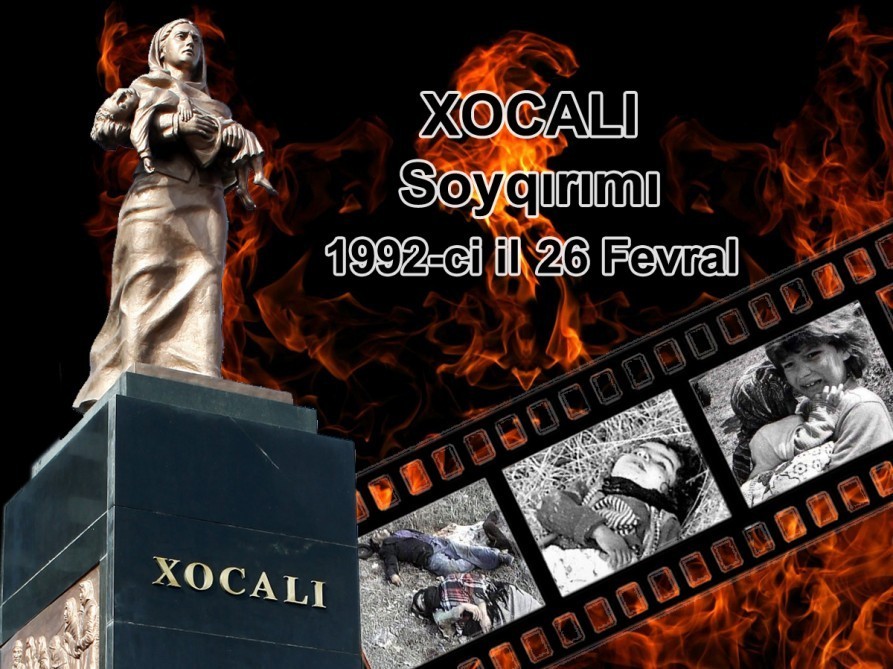 As many as 613 people, including 63 children, 106 women and 70 old people were killed as a result of the massacre. A total of 1,000 civilians became disabled in the onslaught. Eight families were completely annihilated, 130 children lost one parent, while 25 lost both parents. Some 1,275 innocent residents were taken hostage, while the fate of 150 people still remains unknown.

All these acts were committed by Armenian military with extreme mercilessness and inconceivable barbarism. The second battalion of 366th regiment under the command of Major Seyran Ohanian, the third battalion under the command of Yevgeniy Nabokhin, staff chief of the first battalion Valeriy Chitchyan and more than 50 officers and ensigns took part in the attack, according to information from “The Investigation Materials Concerning Khojaly Occupation”.

A part of the town residents, who attempted to flee, were killed by Armenians in pre-organized ambushes. According to the Russian Remedial Center Memorial, 200 corpses were brought from Khojaly to Agdam within four days of the massacre. Facts of humiliation on dozens of bodies were registered. Forensic examination in Agdam was performed on 181 corpses, including 13 children. The examination revealed that 151 people died from bullet wounds, 20 people died from shrapnel wounds, 10 were killed with blunt instruments. Facts of scalping people alive were also revealed.

The Khojaly genocide has become one of the most terrible and tragic pages of Azerbaijani history.

Azerbaijani people have faced ethnic cleansing and genocide by Armenian nationalists and chauvinists for 200 years. Azerbaijanis were deported from their historical lands and became refugees and internally displaced persons, and all this was accompanied by massacres committed by Armenians.

About 250,000 Azerbaijanis were forced from their historical territories in 1988 and Armenia became a mono-ethnic state.

The Nagorno-Karabakh events, which began in 1988 along with continuous efforts to implement the Armenian desire of building “an Armenia from sea to sea”, led to destruction of towns and villages, murder of thousands of innocent people, as well as the exile of hundreds of thousands of Azerbaijanis from their historical lands.

Armenia’s government is trying to annex Nagorno-Karabakh despite international legal norms, demonstrating its readiness to resort to any kind of crime and atrocity. The Khojalygenocide – a tragedy of the 20th century – was a result of this aggressive and criminal policy. This tragedy of the late 20th century was one of the most serious crimes not only against the people of Azerbaijan, but humanity as a whole. The Khojaly genocide is comparable to the tragedies in Khatyn, Hiroshima, Nagasaki and Sơn Mỹ.

Why did Armenians choose Khojaly as a target? On one hand, they were intending to destroy strategic barriers in Karabakh’s mountainous part, and on the other hand, Armenians just wanted to completely destroy Khojaly – a settlement, reflecting the historical and cultural traditions of Azerbaijanis from ancient times to the modern period.

This distinct culture is known as the Khojaly–Gadabay culture in the Azerbaijani history. The cromlechs, dolmens, cyclopean structures and tumuli as well as different monuments in Khojaly are the samples of material culture reflecting the dynamic development of human society here. Destruction of this material culture and the Khojaly graveyard – one of the most ancient cemeteries – after the Armenian occupation is the proof of Armenian barbarism and aggression against the world cultures.

Stories of the Khojaly genocide victims are horrifying. Antiga, a Khojaly resident, was burned alive because she refused to say the area “was part of Great Armenia.”

Sariyya Talibova, another Khojaly resident, said, “Four Mehseti Turks and three Azerbaijanis were decapitated over the grave of an Armenian. Later they [Armenians] gouged out the eyes of two Azerbaijanis.”

Armenians scalped people alive, beheaded them and cut other parts of their bodies, gouged children’s eyes and disemboweled pregnant women.

Forbidden bullets of 5.45 caliber and chemical weapons were used in Khojaly during the attack.

All these prove that Armenia committed genocide against civilians, violating Geneva Convention’s protocols.

The Khojaly genocide, committed with a particular atrocity, terrified journalists and publicists from Russia, Georgia, Great Britain, France, Germany, the US and other countries.

International conventions and laws in all countries condemn genocides like the Khojalytragedy, and call them inadmissible.

The world must know that this crime was directed not only against the Azerbaijani people, but also against the whole civilized world.

This crime should not go unpunished. Armenia’s military-political aggression must be condemned by the world community. International organizations and parliaments of world countries must give political and legal assessment to the Khojaly genocide committed by Armenia in Azerbaijan’s territories.

It should be noted that the parliaments of several countries have made decisions recognizing the Khojaly genocide.