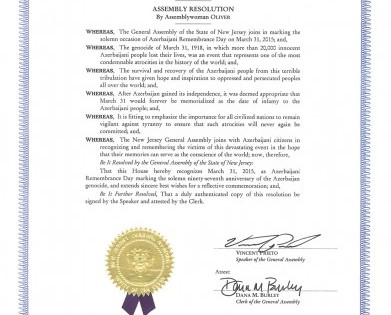 The General Assembly of the U.S. State of New Jersey has issued a commemorative resolution on Azerbaijani Remembrance Day marking the 97th anniversary of the Azerbaijani Genocide of March 31, 1918.

Authored by Assemblywoman Sheila Oliver, the resolution was signed by Speaker of the Assembly Vincent Prieto.

New Jersey issued a similar legislative recognition in 2013. Azerbaijani Genocide has also been recognized by individual official proclamations in the states of Texas and Nevada.

New York became the first state outside of Azerbaijan to legislatively acknowledge Azerbaijanis Genocide as a historical fact, when NY State Senate adopted Resolution J3784 in 2012, also through efforts of the Azerbaijan America Alliance and ASA Pax Turcica.

The state of Nevada has twice issued a proclamation – in 2009 and 2011- on observing March 31 as a Day of Remembrance.

In March 1918, armed groups of the Armenian Dashnak party in concert with Soviet Bolsheviks massacred thousands of innocent Azerbaijanis and people of other Muslim nations in Baku and other cities of Azerbaijan.

A special investigation commission set up by the Azerbaijan Democratic Republic on July 15, 1918 collected a great number of documents and submitted them to the government.

National leader Heydar Aliyev issued a decree on March 26, 1998 to commemorate March 31 as the Day of Azerbaijanis’ Genocide.