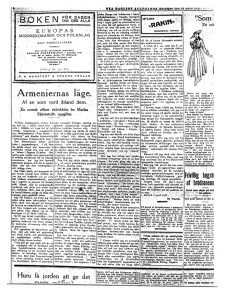 A Swedish officer who was tasked in the region during the Armenian relocation denies the Armenian genocide claims in an article published in a Swedish newspaper in 1917.
The newspaper “Nya Dagligt Allehanda” gave place to the article by Major Hjalmar Pravitz who was commissioned in the region between 1915-1917. Pravitz said that he had decided to write that article after reading Marika Stjerstedt’s book “Piteous Situation of the Armenians” on genocide claims and mentioned that he threw that book that was “entirely full of lies” to the garbage can.
Major Pravitz reveals his observations on the Armenian relocation as follows: “I have always witnessed misery. But I have never witnessed a pre-planned massacre anywhere. It was necessary to comprehend the reasons why the unreliable Armenians were expelled from the northern parts of the Ottoman Empire and that Ottomans did this for inevitable reasons. I am telling that the ones who said or wrote that Armenians lived under a kind of Turkish captivity and were under continuous pressure are lying. On the other hand, as to the large Armenian relocation, I also have to admit that efforts spent by the authorized Turkish institutions to reduce the difficulties for the migrants were so incomplete and insufficient. But I never saw any Turkish attack against these ill-fated people. As an eye-witness, I extremely oppose the claims suggesting that the Turkish gendarmerie units that oversaw the migrants conducted a massacre against the Armenians”.
The Swedish officer, who stated that the ones who claimed that Armenians lived under a kind of Turkish captivity and were under continuous pressure were just having illusions, notes the following: “For instance, what can be said to the Indian kulis and Bengalis that live under the British colony, nationalists that live in Iran Azerbaijan under the Russian policy of “penetration pacifique” (entering into the country without being perceived), the black people in the Belgian Congo, and the local people living in the Kaucuk (Rubber) region of the French Guana! I believe all these nations have undergone a lot more pressure than the continuous pressure that allegedly Armenians experienced and more than the number of victims they gave.”
Stating that that efforts spent by the authorized Turkish institutions to reduce the difficulties of the migrants were so incomplete and insufficient, Pravitz adds that “However, to tell the truth, I would like to underline once again that given the difficult conditions that Turkey was experiencing, namely taking into consideration the fact that she was under attack by three powerful enemies, it has became impossible for Turkey to carry out an organized aid campaign. But I never saw any Turkish attack against these ill-fated people.”
The Swedish officer, who mentioned that Armenians whom he was with in those days, too, did not say a word about massacre, said the following: “I traveled on River Euphrates for fourteen days. According to the information that Ms. Stjernstedt gave, during this trip I should have seen at least one attack carried out against Armenians. In such a case many Armenians should have been floating dead on the River Euphrates. We were together with Dr. Schacht (German Pyhsician Major Dr. Roland Schacht) on this trip. Then we met with him again in Baghdad and talked. He never told me such things.”
The Swedish Major clearly suggests also in his book “Iran between Calmness and Storm” that Armenian genocide claims are lies. (*)
A Swedish Major comes up with an article in which he explains what he had personally experienced in 1917, but it is taken as a fairy tale…
The Swedish Consul-General to Istanbul Ingmar Karlsson said the following in October 2006: “the Swedish policy about this subject is very clear: History is written by historians, not by politicians. The Swedish parliament has not adopted a law on this subject until now, and will not adopt one hereafter”. What will happen then? It will become a lie.

1. Armenian-Azerbaijani conflict: roots. Massacres of 1905-1906 2. Massacres in Zangazur 3. The massacres of 1905-1906 4. More than two-thirds of the Muslim population of Yerevan province, had either been killed or forced to flee 5. Massacres in Erivan Province (1918-1920) (I) 6. The report by Azerbaijani special committee of investigation’s on investigation by him of Muslim villages and Javanshir, Shusha, Jebrail and Zangezur uyezds of Ganja province