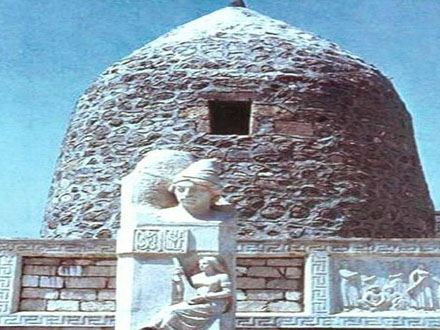 Renowned as an adroit master of bayati (a lyrical form of Azerbaijani folk poetry) both in folklore and written literature, Sari Ashuq had become a legend and celebrity in his lifetime, his name and profession had gone through the test of time and reached the present day. In 1927, archaeologists examined Sari Ashuq’s tomb and shrine at the Gulabird cemetery and came to a conclusion that the shrine belonged to the XVII century.

Sari Ashuq hailed from the tribe of Orucmammad which was a big generation in the village of Gulabird. They are natives of Garadag province. They say Sari Ashuq and Orucmammad were both relatives and moved simultaneously to the village of Gulabird. Literary critics classified Sari Ashuq in the history of the world literature not only an adroit master of bayati of the Azerbaijani literature, but also of the whole Turkic world.

After the occupation of Lacin District by the Armenian armed forces, the building of the museum and up to 200 exhibits were destroyed and plundered. Ramiz Qanimatoglu is the director of the museum. At present the museum functions in the settlement of Pirakuskul of Absheron District.