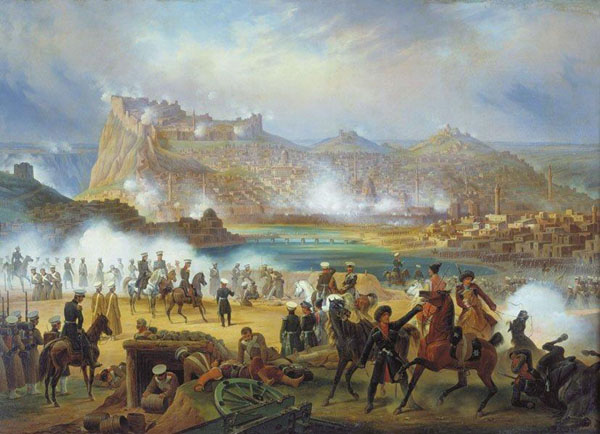 They took the place of Turks and others Muslims who had been evicted. The best example of this population exchange comes from the province of Yerevan (or Erivan). Today the Yerevan Province is the Armenian S.S.R., but prior to 1827 it was a province of the Persian Empire. The majority of its population was Muslim, primarily Turkish. In their conquest the Russians either killed or forced to flee approximately 30% of the Muslims of Yerevan. The Muslims were replaced by Armenians from the Persian and Ottoman Empires. (Even so, it was not until the latter half of the nineteenth century, after further expulsions and migrations, that what today is Armenia became primarily Armenian in population.)

The results of the 1827-29 wars were a prototype of what was to come. Many Muslims, particularly Turks, were forced from their lands by the Russians. Others left because they had no wish to become Russian subjects. In the Ottoman Empire, some Armenians had assisted invading Russian armies during the Ottoman-Russian War, in which Russian armies had reached the city of Erzurum. These Armenians hoped that the Russians would be able to keep all the lands they had taken. When the other European Powers forced the Russian to hand back much of their conquests many Armenians left with the Russian armies. Some undoubtedly feared for their lives, others wished to be ruled by the Tsar rather than the Sultan. Like the Muslims who left Yerevan, their allegiance was religious and they left to follow it. Some sources estimate that 10,000 Armenian families left Eastern Anatolia for the lands newly conquered by Russia.

For the next 100 years the pattern of population exchange set in the 1827-29 wars continued:

Wars were fought in which the Ottomans were defeated by the Russians.

The Russians were not allowed to retain all the lands they had conquered. Other European States, fearful of a change in the balance of power, forced them to return some territory to the Ottomans.

Turks and other Muslims in the lands kept by Russia fled to the Ottoman Empire during and after the war.

When the Russians left the territories they were forced to relinquish Armenians accompanied them, usually at least in the tens of thousands.

During the years between wars, many Armenians and Turks emigrated to join their families, get jobs, pay lower taxes, etc., or just to be with others of their own religious or ethnic group.

Even in times of peace between the wars the Russian Empire fostered the immigration of Armenians. The methods used are familiar today–tax breaks and promises of employment. Armenians were encouraged to come into the Russian Caucasus provinces by promises of free or inexpensive land grants and relief from the usual Russian taxation. Although the promises were often not kept and some Armenians returned to the Ottoman Empire, the Russians provided sufficient incentives to attract many Armenians.

held back by the dual burden of economically reforming what today would be called a hird World Economy and paying for repeated losses of land and money to Russian invaders, could not provide the economic opportunities available in the Russian domains. This was particularly true after oil was discovered in the Russian Caucasian provinces. The Russians favored Armenians as businessmen in the oil rich region of Baku (even though the population of the Baku Region, Azerbaijan, was mostly Turkish). Thus there was good

By no means did Armenians migrate only to Russia. Armenians also left Eastern Anatolia for Istanbul and for the cities of Western Anatolia and Ottoman Europe, in numbers probably greater than those who went to Russia. Eastern Anatolia was a disadvantaged area from which Armenians and others had been moving since Byzantine days. They also emigrated to other foreign countries, especially the United States.

From the book of Justin McCarthy, Carolyn McCarthy. “Turkrks and armenians” – A Manual on the Armenian Question.

1. Armenians’ parody claim to the ancient Nakhchivan 2. B.Ishkhanyan: “The Armenians living in Karabakh are partly natives – the descendants of the ancient Albanians, partly refugees from Turkey and Iran” 3. S. Lisitsyan: “Judging by the names of the modern monasteries of Nagorno-Karabakh, the activity of purely Armenian saints was feeble here” 4. Scholars denounced the Armenian falsehood 5. Completion of Gregorianization and Armenianization of the Azerbaijani-Albanian population of Karabakh 6. The Architectural Style of Churches in the Territory of Karabakh and in the Present Armenia is the Architectural style of the Albanian Temples