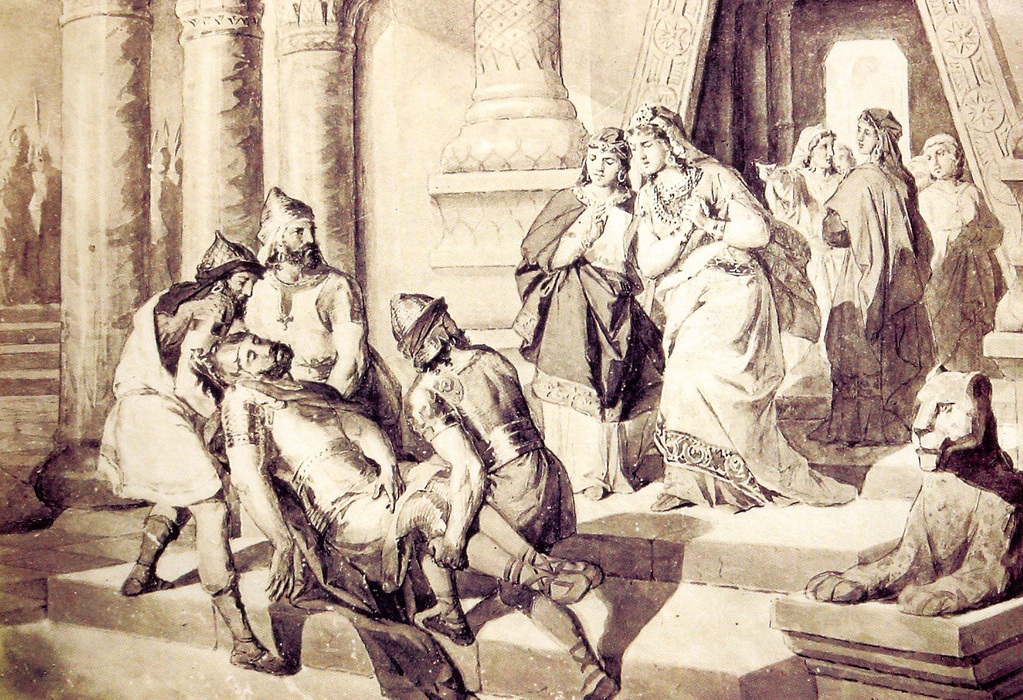 Some authors link the historical origin of the Armenians to the early periods of the human civilization, connect their origin directly with the Anatolian plateau and the Caucasus, claiming that the indigenous population of the territory is exactly the Armenians and by doing so, they do not often refer to very reliable historical sources but to reports of mythical-religious nature, of which the authenticity are quite questionable.

The major foothold of those who claim that Armenians as a people had emerged on the Anatolian plateau is “The History of Armenia” by Movses Khorenatsi, absolutely mythical book, deprived of historical realities. This book claims that the history of Armenia originated from the period of Prophet Noah and the Armenians are the descendants of Japheth’s generation, the son of Prophet Noah: “From Japheth Gomer, from Gomer Tiras, from Tiras Togarmah, from Togarmah Hayk, from Hayk Armenak, from Armenak Aramais, from Aramais Amassia, from Amassia Gegham, from Gegham Harma, from Harma Aram, from Aram beautiful Ara was born.” It is impossible to prove historicity of any of the listed individuals due to the absence of sources. K. Patkanyan notes that “this genealogy as a whole (Hayk-Armenak, Aram-Ara) is made of myths…”

Nikita (Mkrtic) Osipovich Emin, who translated the book into Russian and published it in Moscow in 1858, also admits that “The History of Armenia” by Movses Khorenatsi, is based on myths. With reference to the sources of the book, the translator notes that “The History of Armenia”, made up of three books, (the fourth book is said lost) is written on the basis of multiple sources and covers the period up to 433 from the birth of the first man. However, one of the cited sources – Mar Abas Katina of Syria – is considered to be the main source. M. Khorenatsi’s ancient history is said to be written on the basis of this source “borrowed from a variety of sources, and therefore, not similarly treated everywhere with regard to proximity to the reality. In other words, N. Emin hints that Mar Abas Katina’s work is not a reliable source. According to Emin, Mar Abas Katina’s work, made up of four books, penned 140-120 years BC, had been written on the basis of Haldey myths and M. Khorenatsi used the Greek version of this book. He notes that “Mar Abas did not refer to official source from IX to XIII chapters of the first book, that is, from Hayk to Aram, the time when the Assyrian monarchy was established”.

Some authors also stress that “The History of Armenia” by Movses Khorenatsi is fake. To this effect, thoughts of French author Auguste Carrière are worthwhile. He proved that M. Khorenatsi had described Armenian patriarchs in the example of the Bible and to this effect, his work is nothing but a fake. Actually, we can assume that Mar Abas Katina’s work was adapted in favor of the Armenians and owned by M. Khorenatsi, and this time, the latter acted purposefully, that is, and we can assume that he fulfilled a specific order. M. Khorenatsi was fulfilling an order, V. T. Sirotenko writes: “The ancient Armenian historian Movses Khorenatsi worked on the order of Armenian nobleman Sahak Bagratuni and wrote “The History of Armenia.” When compiling this book, Movses Khorenatsi used Mar Abas Katina’s “Armenia’s early history” book”. M. N. Tikhomirov also noted that “under a legend, one of the influential Armenian noblemen offered him to write the history of Armenia.”

“Armenian Scholars and the Crying Stones” by Ilya Chavchavadze, published in Russian language in Tiflis in 1902, played a significant role in exposing the Armenian falsifications and contained the following remarks by French researcher François Lenormant, who reduced the significance of M. Khorenatsi’s book as a source, to nil: “We should accept as an undeniable fact that up to Tigran I, contemporary of Cyrus, Armenians did not have any national traditions. Talk of events up to this period, everything narrated by Armenian writers is based as a source on the work of Movses Khorenatsi and the pseudo-chronicler Marobaza Katina’s fabrications.”

In his Russian language “Movses Khorenatsi’s The History of Armenia in assessment of K. Patkanyan” book, E. A. Akopyan notes that the accuracy of Khorenatsi’s facts were cast doubts at by Goodsmith, Carrier, Katrmer and other authors. Though he describes M. Khorenatsi as “proper historian”, “real patriot”, K. Patkanyan also raised disguised doubts on his work: “If Khorenatsi did not suspect everything non-Greek, would have paid more attention to the popular sayings, would not have limited himself to hints that were difficult to understand, his book would have been beneficial twofold.”

Khorenatsi is traditionally said lived in the V century. Focusing on the period in which the author of “The History of Armenia” lived is important with regard to clarifying some aspects in connection with the topic under research. Thus, some of the events described by M. Khorenatsi in his book did not refer to the V century but later periods.

1. Khalatyants claimed that “The History of Armenia” by M. Khorenatsi was first published in 1695 in Amsterdam, where a big Armenian colony lived and “…during the first familiarization of western European scientists with M. Khorenatsi, his History… came under tough and relentless criticism.” La Kroz, the head of the Berlin Royal Library, XVII century French orientalist, according to G. Khalatyants, a perfect connoisseur of the Armenian language, based on anachronisms in M. Khorenatsi’s book said that he did not live in the V century but either in the IX, or in the X centuries.

As for the mentioned anachronisms, for instance, the French author indicated that Bulgars emerged in the VI century A.D as against II century BC referred to by Khorenatsi, or the reference of the VI century Baynard Castle to the I century. The late XVII, early XVIII Dutch Armenian expert, Ioakim Schroeder also shared La Kroz’s views. The views that M. Khorenatsi lived after the V century were supported by Y. A. Manandyan, I. M. Dyakonov, A. P. Novoseltsev and others.

All these suggest that the custom of Armenians to adopt the history and culture of other nations, to create a false history for themselves started from Khorenatsi, and his “The History of Armenia” book cannot be considered as a serious and reliable historical source.

1. Resettlement of Armenians to Karabakh 2. Armenians’ parody claim to the ancient Nakhchivan 3. B.Ishkhanyan: “The Armenians living in Karabakh are partly natives – the descendants of the ancient Albanians, partly refugees from Turkey and Iran” 4. 81.749 Muslims and 25.131 Armenians lived in the “Armenian Province” in 1852. 5. The Architectural Style of Churches in the Territory of Karabakh and in the Present Armenia is the Architectural style of the Albanian Temples 6. Completion of Gregorianization and Armenianization of the Azerbaijani-Albanian population of Karabakh